At first glance, Adelaide may seem an odd place for hosting the Velo-City conference. When you think of the names of cities around the world that might be described as cycling friendly, Adelaide is not at the top of the list. We have wide roads dedicated solely to motorised traffic and it is rare to see traffic calming on even the quietest residential streets. Nevertheless, thanks to the work (among many other people) of an energetic and forward-thinking mayor, Adelaide did get to host not only the conference but cycling and infrastructure experts from around the world - along with a whole bunch of cool other people.

It was a rare but expensive opportunity and one we will not have again for a long time. That was the reason I forked out the not insignificant sum to get in.

One of the best parts of the conference was meeting with people I had been following on the Net for a while and feeling as if I had known them for a long time; members of Freestyle Cyclists, Dr Behooving, Perth Biker and the fabulous Free-Dame Cyclist, Sue Abbott.

It was not until the very end of the conference that it really made the news, which was a pity because many of the messages really need to be reported - for example, Dr Larry Frank's amazing talk on the links between walkable and bikeable neighbourhoods and general public health (watch out for that one when the presentations come online). Having said that, by the end, both the ABC and InDaily had published good reports.

There have already been a number of blog posts about the conference (the ECF reported on days 1, 2, 3 and 4 separately) so I just want to point out one small presentation that I thought was particularly relevant to Adelaide. 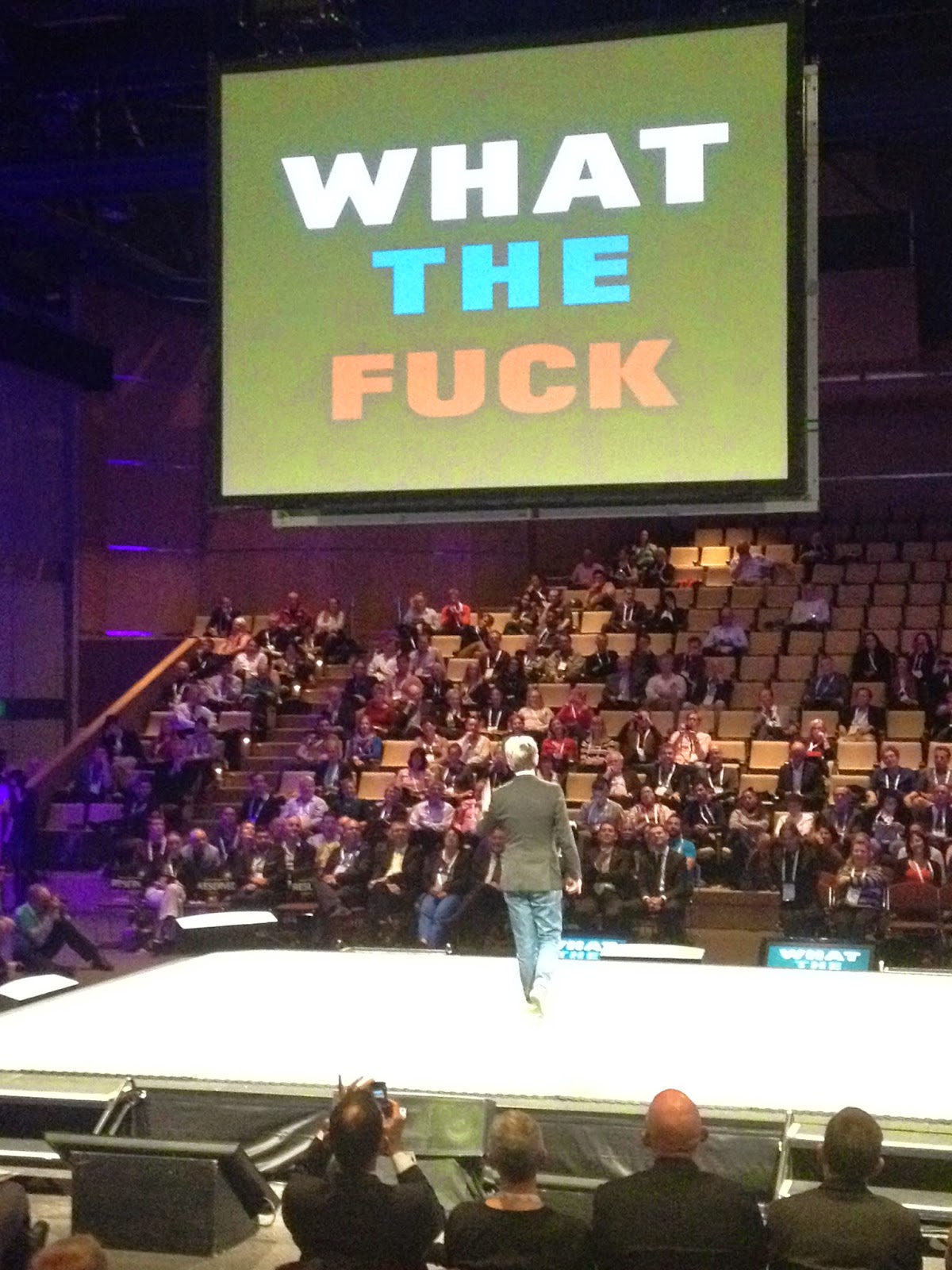 After the opening, including Mikhail (oops) Mikael Colville-Andersen's timely and effective "what the fuck" speech, we had our morning break. I took the opportunity, like the tragic groupie I am, to go and say hello and thank him for coming all this way. After a short chat about Adelaide, he introduced me to Blanka Bracic from Calgary. With all of the stats at his fingertips, he explained how Calgary (a city of 1 million like Adelaide) planned and approved its city wide bicycle network and recommended I go and watch Blanka's talk. Funnily enough I had already circled it as one I definitely wanted to see.

Calgary City Council had up to $22m to spend in a bicycle capital budget. They could have built a car park that would serve 435 people per day or, they worked out, a bicycle track network that would serve 2470 people per day. So they decided on the network. Most cities start with one route (eg: Frome Street) but they decided to do the whole thing in one go and to do it as a trial.

Doing one street at a time becomes complicated. Each has to be justified and subsequent ones are determined by reference to the performance of earlier ones. According to Blanka, they were already on a bit of a roll. Their 7th Street route had doubled bicycle trips and pavement cycling had reduced from 25% to 1%. Something seemed to be working.

The benefits of the pilot proposal were that it was easier to "sell" to reluctant councillors and to a public unfamiliar with cycling networks and the benefits of a complete network would be experienced first hand.

Just as happened when our tramway was extended through the city, there were plenty of information sessions and public displays. It was also well advertised. The message was transport choice with safe space for cycling and predictable space for each mode of transport.

When choosing the network, a minimum number of streets was chosen to ensure minimum disruption (or perceived disruption). Three north-south streets were chosen and two east-west. Once that was done, there were three post-installation options available: (1) leave as a pilot, (2) convert to permanent for $5m or (3) remove everything at a cost of $2m.

When the decision was made, the debate went on for 13 hours and 37 different presenters were heard from. After all that, it got the go ahead. A few councillors were still fence-sitters but it seems the pilot nature of the project is something that tipped the scales in its favour.

Time will ultimately tell what happens but I am quietly confident that once complete, this will become a permanent fixture and, hopefully, something that is expanded.

There are a couple of lessons. The first is that if Calgary can do it so can we. There is very little to distinguish our two cities that would constitute a barrier to this. A complete city-wide network makes so much more sense than part of a street here and there. And a "pilot" is so much easier to sell.

The second is that Blanka and her team faced the same obstacles as we do. Frome Street has attracted a fair number of negative editorials and Calgary was no different. Also, read some of the comments on the newspaper articles I have linked to. You only need to read for about 30 seconds to realise they are exactly the same as we get here.

This went ahead despite them. So could we. The answer I think is to ignore the comments but do what Blanka's team did (and the tramway team did) by advertising and informing well. That way you do not need to respond directly to the negative carping. While I was reading up on Blanka's work after I had heard her presentation, there was a highly relevant tweet from Captain Crom that popped up on my timeline: 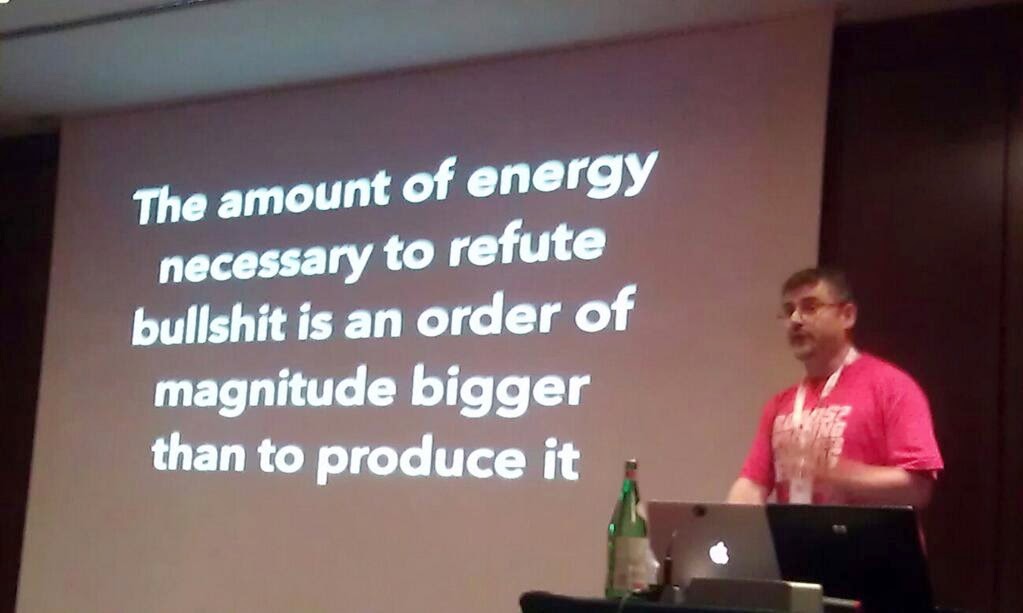 You will not get anywhere by engaging with nonsense on comments pages so don't waste energy trying.

I enjoyed all of the presentations at Velo-City but especially enjoyed the round-table sessions where we could share ideas. It was there that I met people from the Department of Transport, Adelaide City Council, other Adelaide Councils and from interstate. What impressed me was the enthusiasm and knowledge they all shared. They taught me a thing or two.

One of my very favourite parts of the conference was Niels Hoe's talk (he runs HOE360 Consulting in Denmark and was interviewed on ABC News before the conference began).

He said during his talk, "if I didn't have all that cycling around me, I wouldn't be as happy" and had one of the best images of the conference: 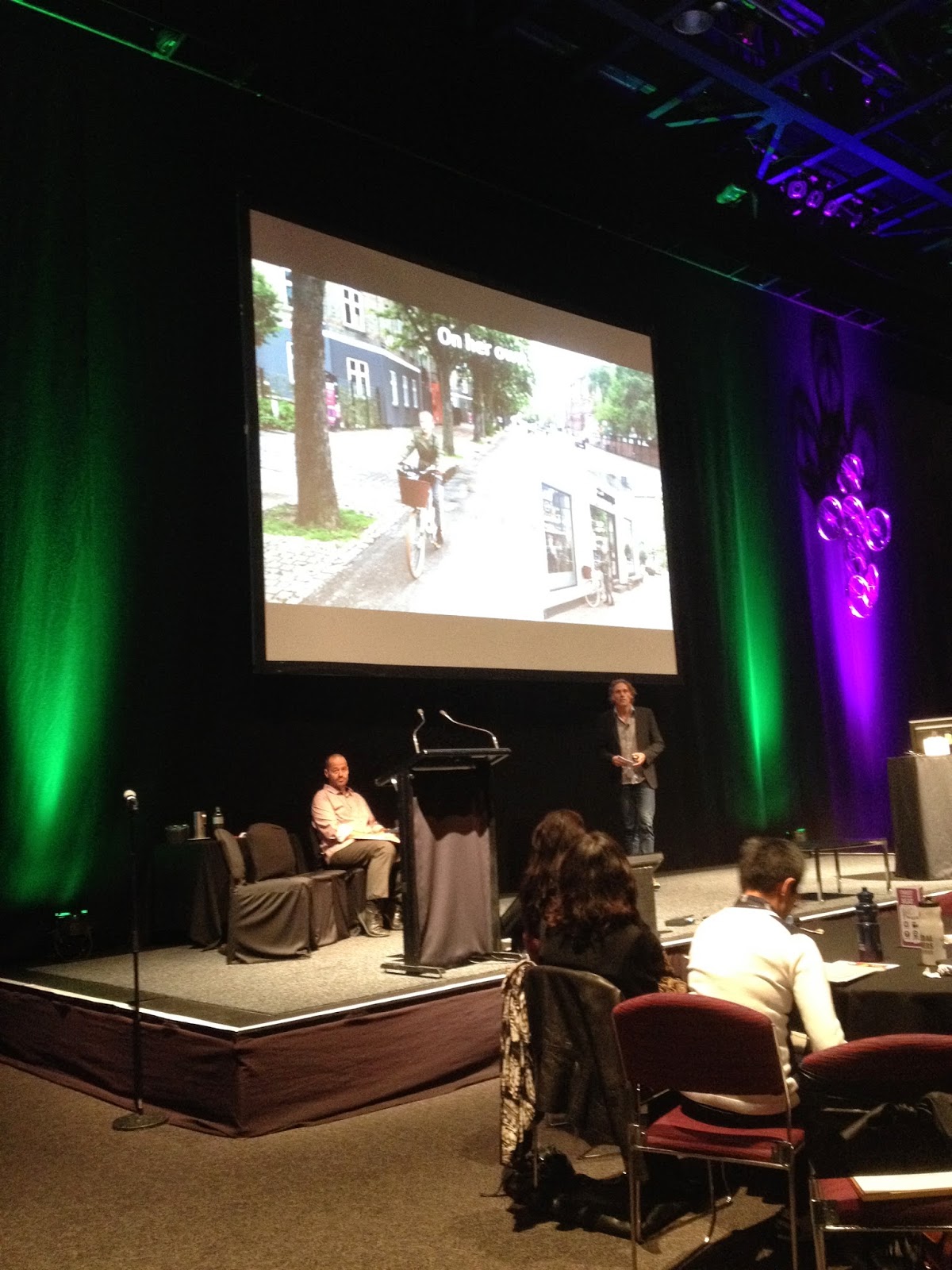 Update: 14.6.14
Blanka kindly emailed me to point out a couple of factual errors I had made. They have now been corrected. And, dammit, I spelt Mikael's name wrong. My apologies.

Update 27.6.14
The talk by Larry Frank I mentioned above has been posted to YouTube. It is a must-see.

Disappointingly, family commitments got in the way of me attending what by the sounds of it was the highlight of the entire conference - a free evening at Bike Kitchen in Bowden with speakers including Mikael Colville-Andersen, Stephen Fleming and Sue Abbott. I had to follow it jealously via Twitter. Still, what can you do? It doesn't matter. They were here, they inspired and Adelaide is the better for it. It's up to us to keep the momentum.