There has been a lot of talk and press coverage of new laws introduced recently in New South Wales. Mostly, they increase (massively) fines for various bicycle infringements so that now you face a fine of something in the order of $391 for not wearing your helmet compared to the $71 it used to be.

I still don't understand the need for the increase. I assume it was so that people on bikes and in cars are treated "equally". It's a laughable notion and a pointless goal.

When you see an interview with the architect of the laws, the Roads Minister Duncan Gay, you see someone with very fixed views (many based on personal biases and a lot of misconceptions) and someone who rarely in fact listens. When I watch him, he gives the impression of someone who is thinking what he is going to say next rather than actually engaging and responding to questions.

As he claims, he is "all about safety".

The thing that puzzles me most is the chain of logic he seems to have adopted. The starting point was that too many cyclists are killed and injured each year. We would all agree with that. The next step is then ergo we must increase fines. The clear assumption of course is that the death and injury is solely the fault of people who happen at the time to be on a bike. It conveniently ignores, for example, dooring injuries but it blatantly ignores the facts about who is responsible in most collisions involving bikes.

Where I am really dumbfounded is that while Mr Gay is saying he is "all about safety", at the same time he ripped up the College Street that was installed only a few years before at not insignificant cost. Not only that, he did not have it replaced with anything on any alternative route.

Prior to its removal, it was one of Sydney's busiest pieces of dedicated cycle infrastructure, used by 2200 riders each weekday. Transport for NSW's own report showed that it regularly carried as many people as the lane for cars that runs alongside.


As you would expect, the road is still used by people getting places by bike but compared to before it is only a handful. Despite Mr Gay's claims of being "all about safety", it is dangerous for them. Not only that, it slows down motorised traffic:


These are Michael O'Reilly's pictures

Mr Gay thinks he's doing something about traffic flow but thanks to him, everyone loses out. The few cyclists using the road effectively block a lane. You may as well have left the bikeway!

While London is shooting ahead, Sydney and the rest of Australia continue to plod about in the 1970s. 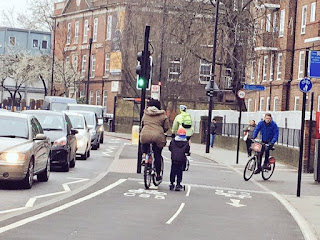 
This is not about cars vs bikes. I do not understand the weird attitude that leads to bizarre decisions like this one. The issue is simply one of choice. A multi-modal city is one where people chose a mode that best suits a journey. Currently we can "choose" the only one that's catered for.

This signed (placed not long after the laws were introduced) really says it all: 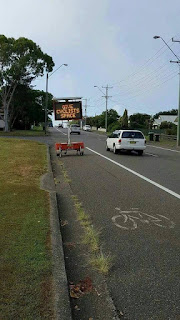