In any conversation about cycling, the benefits it can bring and the need for decent infrastructure, the cities of Copenhagen and Amsterdam rear their cycling friendly heads. Someone for whom all of this is not necessarily an issue will inevitably say, not unreasonable, that Adelaide is not Copenhagen.

While Adelaide might not be Copenhagen, it does have some similarities. Contrary to popular belief, greater Copenhagen is fairly spread out and like Adelaide, many of its streets are wide with more than one lane in each direction of free-flowing traffic: 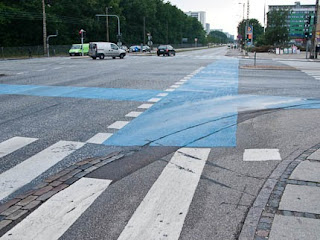 (Original here).
It is the wide separate bike lanes that distinguish it from Adelaide.

Wouldn't be a cool thing though if there was a decent example of Australian style cycling? Well, I was in Byron Bay this weekend. It is, if I may say so, one of the most beautiful spots on the planet. Absolutely stunning coastline and views of the mountain ranges close by, plus the town itself is a pleasure to be in.

One thing I noticed was that cycling has totally taken off there. On the beachfront there were bikes everywhere. In keeping with the beach culture, the bikes the dudes and dudettes rode were often cruiser style bikes you might expect to see on the west coast of the U.S: 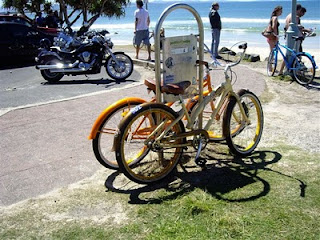 On the streets too, bikes were everywhere. Byron Bay is so popular that even on a Sunday, traffic is slow moving. Even with no real cycling infrastructure to speak of, bikes are all over the place. I am a crappy photographer so hardly got any pictures of them all but there were there.

There seems also to be a no-helmet policy. I could be wrong but looking around I saw about one person in five (if that) who chose to put a helmet on. I caught a couple of them. Here are two people, one with and one without: 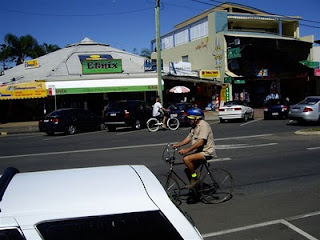 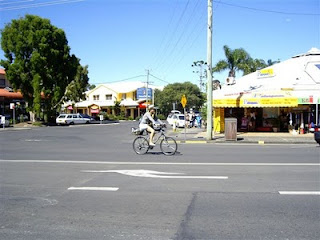 In the main, riders can be divided into two groups - beach bums in boardies and hippies.

As I say, they were everywhere.

I couldn't tell just by looking what led to such a strong bike presence. The strong hippy culture can't hurt, nor can the large number of young people. The lack of any infrastructure was made up for by the slow traffic which allowed for a shared space system to work very well.

It also has an absence of big box stores surrounded by car parks. Instead the streets are full of independent shops selling everything - stuff you normally would never find in supermarkets or department stores. My only hope is that they survive as Byron Bay gets more popular and the rents get higher.

The Occupational Health, Safety and Welfare Regulations require employers to provide a dining area to their employees. In some offices, employees have a large room with tables and chairs, kitchen facilities and a flat screen tv.

Alternatively, you might want to go outside to a cafe and buy your lunch. Some of us bring their own lunchboxes though and might want to go outside and sit in the sunshine to eat their lunch. It is fairly tragic how few pleasant places there are around town. If you are close to the river, there are some quiet benches near the convention centre. Usually at lunchtime you can see a few people eating their packed lunches.

If you right in the middle of the CBD your options are more limited. Near where I work, there is a space with some benches next to the tall black building on Grenfell Street, just down a bit from Simply Devine. It's pleasant because it's a distance away from Grenfell Street so you can talk with your friends without having to shout. The drawback is that you have to be prepared to breath in second hand smoke from the smokers coming out of neighbouring buildings. That seems to be the only place for miles that has an ashtray.

There are also a couple of benches behind the townhall but beyond that, not a lot. You would think that Victoria Square would be set up as a proper welcoming public space. I have lost count of all of the different plans there have been for it. Until they four lanes of traffic cutting through diagonally and across it are cut down a bit, it will remain an uninviting desert in the middle of the city.

Jan Gehl is pretty much a rock star among architects. He has dealt with this issue across the world, including in Adelaide. When he analysed Sydney, these were some of his findings:

Most public spaces are used to walk through, rather than to sit and enjoy

Streets are dominated by cars

Young children and the elderly are poorly represented among pedestrians.

They apply equally to Adelaide's CBD despite the report that Jan Gehl produced. We know all of this.

Council elections are coming soon. I wish the very best to those candidates who have identified these issues and have the vision and energy to make the changes that we need.
Posted by Edward at 10/13/2010 10:28:00 am No comments:

I love this website: Gruntworks.com. I post the odd picture of a crap bike lane but this guy Grant has gone to town. It's brilliant. He has done it for cycle lanes and footpaths.

Walkerville is a lovely suburb. It has geographically one of the smallest councils in the State and is full of tree-lined streets and beautiful historic houses. Like some suburbs in the east, it retains a village like feel.

In its Strategic Plan, the council's Goal 10 is "Accessible local services that support social interaction and promote physical activity". Strategy 10.4 achieves that by "[developing] local transport infrastructure that encourages walking, cycling and the use of public transport."

Walkerville Terrace is one of the few shopping strips that can almost be described as pleasant to ride along. Not because of its high quality infrastructure but because motorised traffic along it generally travels pretty slowly. It's especially slow during rush hour when you have a long line of expensive 4WDs filled with one person each making the huge long trek from Walkerville to the city. The painted bike lane allows you to sail past them all - provided you're not doored of course. 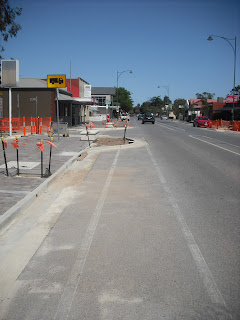 People travelling by bike are now faced with a pinch point where, yet again, they are forced into faster moving motorised traffic. The important thing though is that there are nice cosy (and free) parking places for all of those 4WDs. If you look carefully at the width of the road now that the pavements have been widened, space has been set aside for the lane of traffic and a lane for parking. In other words, the minuscule amount of infrastructure that was there has now been removed to cater for free parking even though on the right behind where the picture was taken is an IGA with its own big car park and further up the road in the direction of the picture are a whole bunch of free off-road car park - all of them free.

If you are interested in transport and how it is planned around cities, one of the best websites I know of is Human Transit. It is the blog of Jarrett Walker who is an international consultant in public transit network design and policy. He is based in Sydney so totally gets the issues that you come across when designing transit systems in Australian cities.

Two recent posts highlighted what you might perceive to be biased language about city transport. The first, avoiding car-centered language: a directive, links to a directive from the West Palm Beach City Administrator about the use of car-centric language. The directive is here. The amazing thing for me is that it was written in 1996. It's only 4 pages long. Print it and keep it.

The second post, if you mean "car," say "car", and talks about phrases in a transport debate that only make sense from behind a windscreen, such as "installing a pedestrian crossing will slow down traffic". A popular one we read all the time in Adelaide Now is along the lines of "a pedestrian/cyclist was injured today when he/she was hit by a car". The pedestrian has an identity but they are hit (using the passive voice) by an inanimate object - the car.