One of the people I met at Velo-City 2014 was Tina Giannopoulou from Malmö in Sweden. She presented in one of the various roundtable workshops and spoke (in flawless English) about the much-publicised new bike parking station that was built there a couple of years ago. Copenhagenize blogged about it in February 2014 and there are a few more pictures of it here.

Tina had me totally on-side from the very beginning when she gave me an orange Malmö usb wrist-band thingo: 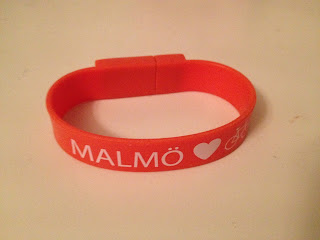 The authorities in Malmö found that when you provide alternatives to the car by way safe routes for riding, people use them (I know, right? Who would have thought?). Also, when they built their brand new railway tunnel under the city (something we desparately need), the stations at Malmö Central, Triangeln and Hyllie needed decent bike parking.

They are bright and cheerful. They have lockers and showers, cargo bike parking and vending machines for bus and train tickets. There is even a shop where you can leave your bike for a service:

Partly because of our land use patterns (which we still persist with) and what we perceive to be the necessity of using a car, park and ride stations do very well here. There are already capacity problems at the stations on the o-bahn, at Seaford and a number of others.

While popular, they are also an indication that we are still getting it wrong. If people need (or perceive they need) to drive a car to catch a bus or train, we are getting our land use wrong and are failing at putting together an efficient multi-modal transport system. If designed well, decent cycling routes can significantly increase the catchment area of public transport stops and stations and also increases (again significantly) the potential customer base. I don't think it is any surprise that something like 40% of Dutch train passengers get to the station by bike.

Decent bicycle parking is one thing but it is kind of useless if it is not easy to get to it.

I wrote a submission a while ago to the State Goverment Integrated Transport and Land Use Plan. I pointed out that there is a large unused are of land next door to Islington railway station that could be used as a park and ride: 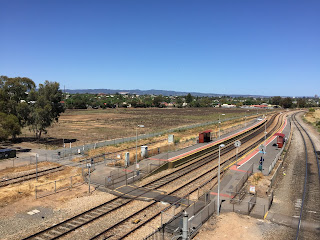 One of the State Government's long term plans is for a tram network including to Prospect which is not far from Islington. The proposed route would run about 700m parallel to the already existing railway line. It seems a bit of a waste to me especially as you could increase ridership at a much lower cost by expanding the catchment area of the railway line.

The block of land is privately owned so it is unlikely to happen in the foreseeable future (even though privately owned land did not stop South Road being widened and turned into an urban motorway. The State Government just compulsorily acquired people's homes and bulldozed them).

The thing about bike parking is that is does not need anything like the space of a car-based park and ride and so it is another area where you can get a massive bang for your buck. You can accommodate a lot of bikes cheaply and in a small space. And it increases tenfold the catchment area of your public transport stations.