A recent article on Adelaide Now lifted me a little. It was about the planned O-bahn extension into the city. It described plans for "bus transit zones" on Grenfell and Currie Streets. The Transport Minister says:

Buses account for 12 per cent of traffic on Grenfell and Currie streets but serve 75 per cent of the people using the precinct.

Well yes, but all this time motorists have had over 75% of the space.

I have been wondering for a while whether the new route would be properly separated in the centre of the streets or whether it will be bus lanes on each side. It is the latter as can be seen from this photo: 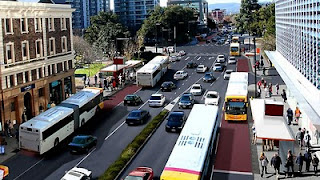 and this further down Grenfell Street: 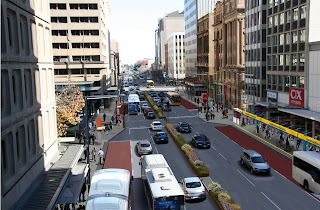 I am still puzzled where the $61m is going though. The first tram extension was completed on time and within the budget of $35m. That involved substantial construction, track laying, overhead wires, four new stations with shelters and even moving a big tree on Victoria Square.

This is nearly twice the budget of that but seems to involve some new shelters and some paint. If you look closely, especially in the picture outside City Cross, the existing lanes are painted red. The buses still have to wait and pull out into other traffic which no doubt will be at a standstill at certain times of the day. The approach to bus lanes seems to be similar to the approach to bike lanes. As long as it does not require any earthworks or encroachment on road space, you can paint it. If there is a conflict, the road obviously wins.

The new bigger transit stops are exactly what is needed as are separate lanes but please Mr Conlon, could you finish them?
Posted by Edward at 12/15/2010 12:42:00 pm 2 comments:

After the phenomenal success of the Melbourne Bike Share scheme (not), a recent article in the Messenger Press suggested that Adelaide should give it a go. Currently, of the 30,000 bike hires per year, only 30% are local people. but we are told "cycling supporters want to see a share-style program catering more to city workers."

Bicycle Institute of South Australia chair Jeremy Miller said in Adelaide the scheme required users to return the bike to where they hired it, meaning it did not encourage “everyday use” for locals going from A to B.

That is of course true.

One good thing would be if city bikes could be dropped off anywhere so you could grab it at Rundle St and drop it off on South Tce.

I have looked and looked and from what I can see you can pick up hire bikes from Adelaide City Council on Pirie Street or from the zoo. To encourage "everyday use", you need a couple of things. The two most obvious are cheapness and ease of use. If you really want people to hop on a bike to, for example, go to a meeting or lunch on the other side of the CBD, you need hire stations all over the place and the bikes must be cheap. People literally have to be able to hop on and go. Unless you are a member, the Melbourne scheme does not allow that.

City employers should encourage workers to ride to the office and between appointments in town by providing showers, lockers and bike storage.

Hmm. Not sure about that. Having to shower to go to an appointment and then mess around with bike storage? I don't think that will work.

What you need is a system of robust bikes set up like shopping trolleys with their $2 deposit. Put in your coin, ride the bike, return it and get your coin back. That is how the Copenhagen scheme works. This is the Helsinki version which is similar to the Danish version: 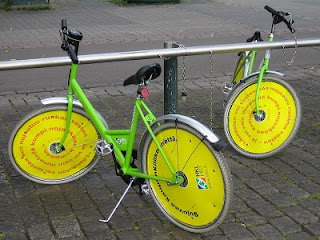 They do not look like any other bike and so stealing them is fairly pointless. If you ride them outside of the hire zone, the police will stop you and issue a hefty fine. Here's a short blog post about them. In Copernhagen, they are free. All you need is the deposit.

If you want office workers and locals to use hire bikes, it must not be any hassle at all. If it is, it will fail.

The other thing you need to make a hire scheme work is safety. Setting up a system of shiny new hire bikes is all very well but it will go nowhere if users have to ride them on busy, dangerous and unpleasant roads. That would be the case with any hire system introduced today. It is also the problem in Melbourne. Fix that first and your bike hire scheme will flourish (come to think of it, so will cycling generally). If people know they can pick up a bike for a $2 deposit and ride a few blocks in safety before giving it back, they will use it.

All of those people have to be housed somewhere. It will be achieved, as I understand the Strategic Plan, with a combination of higher density living and new suburbs. One of the planned new suburbs is Buckland Park, which is far from public transport and other infrastructure. Another planned suburb called Waterview at least includes a railway station.

Most new suburbs in Adelaide have a particular look about them. They generally are made up of lots of quiet roads, including many cul-de-sacs, new show homes and in the middle a Woolworths or shopping centre with a big car park around it.

We have been doing them like that, with small variations, for years.

Once the suburb is finished, you will see some bus stops pop up along one of the main roads passing through. Call me cynical but it looks as if the bus service is the last thing that is considered. Cycling is not encouraged at all for local trips. A non-direct route out of a cul-de-sac is a tried and tested disincentive.

Mawson Lakes is perhaps a little better because it seems to have some bike trails but as usual, they are not designed as part of a transport system but are there to keep fit. They are pleasant paths which go nowhere. Mawson Lakes also has a shiny new railway station but if you go there you'll see it on the opposite side of the suburb from the shops, university and activity. That stuff has been put nice and close to Main North Road to encourage more driving.

As the population expands, we will no doubt see more similar car-based suburbs. You will not see anything as radical as non-direct routes for cars, separated cycling and walking infrastructure or a suburb built around a railway station.

If you want to see that, you have to go to the usual place. This video was made in 2006. It shows a Dutch town called Houten that was expanded in the 1970s to cater for the then growing population. It was made deliberately to be bike friendly and the results today are plain to see. It is not any less pleasant or harder to get around. In fact, the opposite is the case.

If the new Waterworld suburb off Port Wakefield Road followed these design principles, it would be revolutionary for us but would be the start of a slow and very welcome transformation (turn your volume down a bit at the beginning. I don't know why but they've use heavy metal music).

On a recent Hamish and Andy show, they were explaining how most people, when they are watching the Ashes and get up to go and get a drink or food, will do a pretend bowl. The bowling action is always perfect and often ends with a quiet shout of "howzat". One listener rang in to say that when he goes between the lounge and kitchen he pretends he is a V8 supercar driver. When he takes the corner there is sometimes a bit of a slide but it is always well controlled.

Depending on where I am when cycling to work, I occasionaly pretend I am on a beautiful wide and safe cycle lane. When I cross an intersection, I migh also pretend that I am going through special designated bicycle traffic lights. It happens early in the morning before all of the street parking has been filled up. The wide streets with on-street parking are great for it. Frome Road is one of them. This picture was taken just south of Rundle Street: 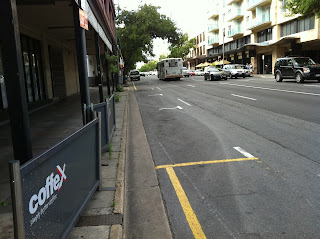 Usually you are unlucky and there is at least one car you have to get past (like the ute in the picture) which can involve an element of luck and does involve a lot of over the shoulder checking, speed adjusting and, usually, a thank you wave to the motorist who let you in or gave you a wide berth.

On the day when you get a stretch of uninterrupted parking lane with no cars on it, you can pretend you're in a slightly raised separated bike lane. When you get to the intersection, you can imagine the lane gently joining with the road but continuing across the intersection with a wide painted blue or green lane. 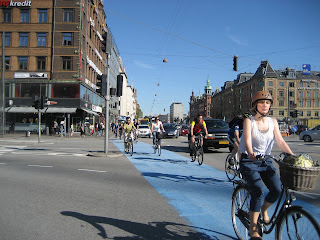 (Original here)
People who come to the city by car obviously need somewhere to park but it must be said that they are fairly spoiled. As we know though, there is a massive number of car parks in central Adelaide, most of them cheap or free. At a recent count (see page 30 but watch out - it is a 3mb pdf file), Adelaide had 15,075 on-street car parks and 31,000 private parks. Compare that to other cities, especially Perth which has a total of 13,000 in a similar but slightly smaller area, and it can be seen that we could probably comfortably lose a few.

On the section of Frome Road I cycle along, the price of car parks varies. On one stretch they have a limit of 1 hour but they are free. Further south where you are starting to hit residential areas, these are the prices: 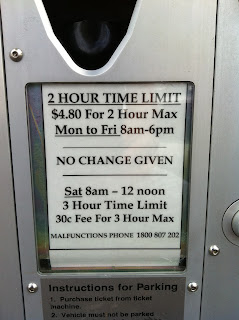 If we assume on a weekday the car park is used for the full 10 hours between 8am and 6pm and also assume the user pays for the whole time, the car park earns $24 a day. In a week, that makes $120. The 4 hours on a Saturday adds 40c. Multiply that by all of the on-street car parks and it soon adds up.

The question is whether it is the best investment for the city. When a space that size is taken up by a car sitting idle, it cannot be used for anything else. Using the space for a wide, raised bike lane is a potentially useful alternative. The space will no longer make $120 a week but will the benefits it brings outweigh that? I think they will. The benefits are well known.

A series of that style of bike lanes on at least a selection of main roads will work wonders. The time is now. If your morning commute is anything to go by, there are more people than ever choosing to get around on a bike. This is what they deserve.
Posted by Edward at 12/02/2010 11:35:00 am No comments: