As captain of the USS Enterprise, Captain Kirk and Captain Picard after him and Captain Janeway after him (and various others) have all been required to follow the Prime Directive. It has been defined in various ways including:

As the right of each sentient species to live in accordance with its normal cultural evolution is considered sacred, no Star Fleet personnel may interfere with the normal and healthy development of alien life and culture. Such interference includes introducing superior knowledge, strength, or technology to a world whose society is incapable of handling such advantages wisely.


In other words, Captain Kirk was not allowed to appear to Neanderthals and show them how his iPhone worked. They were supposed to develop their own iPhone at their own speed.

With certain types of design, the Prime Directive sometimes seems to be alive and well on planet earth. Judging by some of the more recent UK blogposts (eg: this, this and this), you would think that we are simply not permitted to use superior designs already used by other civilisations. Through a long, painful and sometimes lethal process of trial and error, eventually we will learn what works and sometime in the far distant future, we may perhaps even use it. However, until that day, the Prime Directive prohibits us from cutting short our slow development.

We are guilty of that a little here as well. Rather than moving straight to best practice, we like to have a go with things that have already been tried elsewhere but replaced with something better. An example is bicycle storage areas, aka bike boxes. There has been a fair bit of literature written about them and I recall I may even have had a little moan about them at some time or another.

There are two main flaws with bike boxes. First, they are so easily ignored: 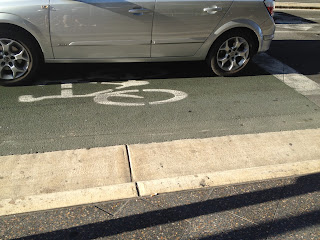 (I did not have to wait any time at all for a driver to ignore the bike box. I just crossed the road and the car was just sitting there)


Second, they are the precise shape of a truck's blind spot: 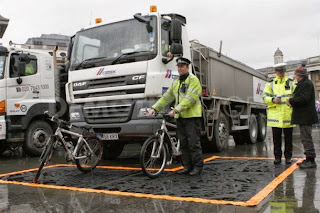 (Borrowed from Demotix via ibikelondon)

Third, how do you use them? The bike lane that leads to them is to the left. When you leave them you travel on the left. Why would you position yourself in front of cars only to have to move out of the way and back to the left once you get moving?

There is a way they could be improved, without breaching the Prime Directive, by turning them into hook turn boxes. At the moment, all we have are those little turn boxes sitting by themselves in the middle of the road: 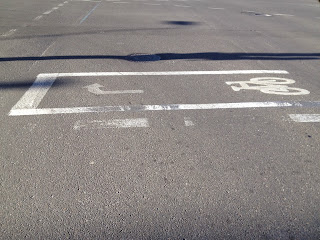 My cheap and cheerful change requires only two small changes.

Put the bike box the other side of the pedestrian crossing: 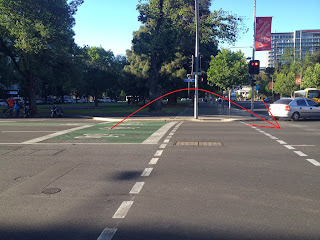 Second, change the stencil to one showing the direction you take to perform the hook turn, eg: 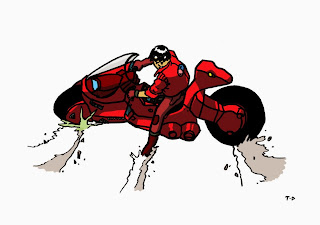 (This picture is not mine. It is shamelessly stolen from Thomas Davidson who appears to be a New Zealander who, among other things, is really very good at art which can be found scattered around his website)

Also, if we have nice wide raised lanes, the bike boxes become redundant for people travelling straight on. Those people can just sit behind the lights waiting for green while the bike box turned that has been turned into a handbrake turn box slowly fills up with people doing their hook and handbraketurns.