Build it and they will come

If ever there was proof of the statement build it and they will come, it is the newly opened cycle superhighways in London. Boris Johnson has just stepped down as Mayor to be replaced by Sadiq Khan. The cycle route were one of the last things he did and they were a huge improvement from the cycle highways mark 1, which consisted of a lot of wasted blue paint on select roads.

Depending on who you follow, there has been a lot of Twitter traffic and a lot of happy faces. What many of the pictures and Vine videos show is that the routes already look to be victims of their own success. There are long tailbacks in places and it is apparent that they really ought to be one-way tracks with the same thing on the other side of the road. 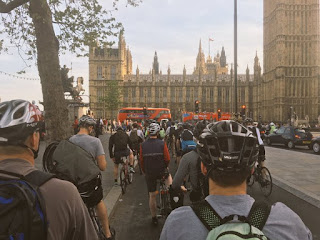 On many of the pictures and videos, it is also apparent that at times the cycle routes are carrying more people than the neighbouring and wider motorised routes, eg:

For all his faults, I think Boris Johnson should be congratulated if for no other reason that those of us in the rest of the world can now point to another city as an example of what happens when you use street space a little more wisely. He said some smart things in his interview:


The routes are far from perfect. They seem to be too narrow for all of the two-way traffic and a number of the junctions need a bit of work. But they have already made a huge difference, along with the 'mini-Hollands' that have been built in a couple of council areas. I hope these things are built on and that in time we lose the 'super' tag and they just become standard.

The whole route can be seen here:


I should of course add that it could never happen here!