One of my favourite blog posts to refer people to after a conversation about transport and urban planning is David Hembrow's much linked-to "all those myths and excuse in one post" post. They are all there.

A common one is the 40 years ahead excuse. It is even the subject of a widget:
As the post says, it is wrong anyway. The actual figure (assuming it is even relevant) is more like 15 years. What was done 40 years ago has long since been replaced and improved.

Not that long ago, part of the Parade in Norwood was resurfaced. It must have cost a fair bit. There was lots of serious machinery and a lot of tarmac. It took a couple of weeks. It was quite depressing to watch. Here was an opportunity to make some changes to the road layout as part of ongoing maintenance but it was left exactly the same. There is bountiful off-street parking but the few on street parks were kept there, blocking buses from pulling out and providing a door zone for anyone game enough to ride a bike along there. 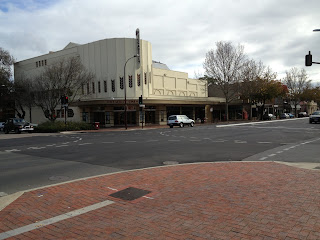 and a close up: 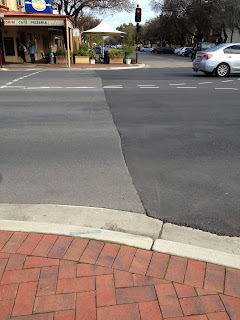 Again, no change whatsoever to the road layout. I wondered how long it has been since that road was last resurfaced and so I asked by making a Freedom of Information request.

I spoke to a very helpful fellow at the council. He explained that the asset life is generally estimated to be around 25 years. However, it quite often ends up being shorter than that. The stretch of O’Connell Street that was just resurfaced was last done 15 years ago. That is no uncommon. For example, the council is finding that Grenfell Street is wearing out more quickly since the bus lanes opened. That seems to me to be a good thing. It shows that the buses are now able to travel along that stretch of road at a decent speed instead of crawling along stuck behind a line of traffic as they used to be. The drawback of course is that the road wears out more quickly.

Another thing that determines the life of the road is its foundation. On busy roads, you need a decent 50cm foundation. Where you start seeing potholes, like there are on Jeffcott Street at the moment, that is often because the foundation is a bit inadequate for the level of traffic that the road is experiencing.

A quick but important aside: different levels of government are responsible for different roads. The vast bulk of our roads are in fact council run and maintained. It is only really main arterial roads that are the responsibility of the State Government. This map shows which ones 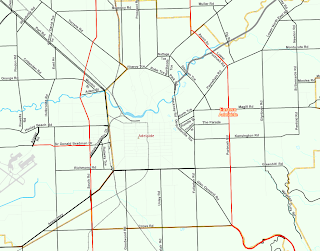 You can see that Adelaide City Council is responsible for everything inside the ring road. That includes very busy roads like North, South and West Terrace, the café strips, Grenfell Street with its bus lanes and everything in between. The paltry amount that motorists pay for registration (not to be confused with compulsory third party insurance which is the bulk of the payment) does not go towards any of those roads. It is all paid for by local residents and business paying their rates. All those many motorists who come into (and through) the city do not pay for the roads through registration and petrol tax. Someone else pays. Granted, the city workers indirectly contribute by supporting the businesses that own the buildings for which rates are paid but it is far from a user pays system. Those motorists who simply pass through do not contribute at all.

Rates provide less than 50 percent of the revenue of the Council, with other revenue gained from fees & charges (including parking fees that are the subject of so many complaints), external funding, borrowings and commercial operations.

The Federal Government has its ‘Roads to Recovery’ program which provides road funding to local councils but it is funding that must be applied for. It does not come automatically. I was told Adelaide City Council receives $850,000 a year. It is not a great deal. Roads are very expensive.

With such limited funding sources it is perhaps not surprising that it takes a while for holes to be fixed and roads to be upgraded.

Getting back to my point, 15 years is not that long ago. Titanic won the Oscar for best picture, Microsoft released Windows 98, Google was founded and season 4 of Friends was broadcast. However in other respects it is a very long time. 15 years ago, most of today's children were not alive. It is topical because of what this recently posted video shows:


A whole bunch of children in the last 15 years have been denied independent mobility. That is a whole generation.

There is no excuse for such a crap and undemocratic system. The frequency of road maintenance shows that genuine upgrades could easily be part of that budget. And there is no excuse for crapness either. Bus lanes, well designed intersections, roads and neighbourhoods that stop rat-running and quality cycling infrastructure are all part of the same road transport system. They should all be paid for out of the same budget.

So I had another romantic weekend away in Melbourne a couple of weeks ago. I highly recommend it. This time round we saw the Australian Ballet do a triple bill of modern ballet pieces. Just beautiful. See it if you can.

Next morning we went to the Art Gallery to see the Monet exhibition. Being a philistine I never knew that Monet spent many years developing his garden in Giverny, about 70km north east of Paris. That then led to Monet's many paintings of lilies, his green bridge and other flowers: 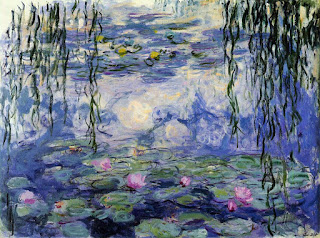 Our hotel was opposite the MCG. Below is a map of the area. The orange arrow points to the hotel (I fear I am fairly crap with graphics programs so a dodgy arrow is the best I can do). The Art Gallery, as I am sure you know, is where the purple arrow is pointing: 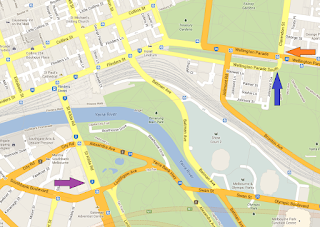 On our first day, to get to the arts centre, we walked along Wellington Parade and then picked up the free city circle tram near where the Hotel Lindrum is. That took us to Flinders Street station and then we walked across the bridge to South Bank.

The next day I was determined to have a go on the bike share bikes and luckily there was a station near the hotel (where the blue arrow is pointing). Had it not been that close, I would not have been allowed. The system is very easy to use and very cheap. You pay $2.70 for the whole day and as long as each journey you make is less than 30 mins you don't pay anything else. Just climbing into a taxi is more expensive than that. 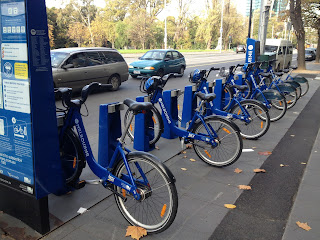 As we all know, Australia is one of three countries in the world with all ages helmet laws. There were about 6 bikes at the station but only one helmet. However a sign where you pick up the bike tells you they are closer than you think: 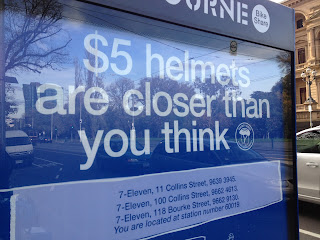 The 7-Eleven I was directed to was about 800 metres away in the opposite direction from where we wanted to go. Also, when the system was introduced there were a number of complaints about a lack of helmets at the 7-Elevens. I didn't fancy a wasted walk so I broke the law instead.

The bikes themselves are great - comfortable and smooth with a functional little luggage rack on the front. The gearing makes the bikes quite slow even in top gear but that kind of works because you end up spending a lot of time on the pavement and journeys are quite short.

We passed another set of bikes near Federation Square and I was able to pick up a helmet there. That meant I was no longer a criminal. I have to say though the helmets are probably the cheapest crappiest examples I have ever seen. And they make you look like a total goob. Before that I had been rolling through the streets looking all debonair with my linen jacket flapping in the breeze. The image was totally destroyed once I put the plastic hat on. A total turn off.

And completely unnecessary. I'd been on the pavement the entire time. Everyone we passed was fine about it. I was doing maybe 12 km/h tops. Is the plastic hat really necessary? There was no way I was going to walk to the 7-Eleven and back. Had I not had a specific intention to use the bikes, like most people, I would not have bothered.

Now it may be that there are other reasons for the woeful performance of Melbourne's bike share compared to other cities. I doubt it though. Dublin uses the same system - with fewer bikes. It is just as hilly and the weather is much worse. Yet it easily outperforms Melbourne by a mile. A combination of ditching the blue hat requirement and setting up a decent grid of safe bike lanes would transform it.

After Monet's exhibition, we took the bikes to see Legally Blonde the Musical (of course). This time, although there were plenty of bikes, there was not a single helmet. Again, the 7-Eleven was "closer than you think" but really? For a 5 minute journey? We both broke the law initially and then found some again near Federation Square. So after a brief spell of feeling just a little bit European, we went back to looking like the two guys off the Motor Accident Commission advert:

Not sure I'll bother next time.

When we dropped the bikes off, there were 3 helmets for 7 bikes (the largest ratio we'd seen). Something tells me they would not have been there a couple of hours later.