Down in the bike lane at midnight

There is an old song by The Jam called "Down in the tube station at midnight". I used to enjoy putting the record because it begins with the sound of an London Underground train arriving at a station. The song is written from the point of view of a man on his way home to his wife where a curry is waiting. He then gets beaten up and describes the close up view of the ground that he sees. It is not altogether pleasant.

Even if you are fortunate enough not to be beaten up, there are more pleasant things to do with your time than standing on a platform waiting for a tube train at midnight. Waiting for any form of public transport at midnight, especially if it is cold, is not everyone's favourite thing to do. At that time of night, unless you live in a city that makes a choice to keep the same service frequency until it stops (like Zurich), you can potentially have a bit of a long wait.

All of us have at one time or the other had to work late. It is nice to get home finally.

I had to stay late last night for a meeting and took the bike home in the dark. I have to say there is something to be said for travelling that way. I sit and whinge repeatedly at the lack of decent cycling infrastructure, at having to share the road with fast moving cars that too often pass by too close, and at the many obstacles on my way that seem to be placed there to make life difficult.

You forget all of that though when you ride at night. It is the best way to travel. There is little traffic, you have that cool autumn breeze in your face (though not in your hair alas) and you can smell what people are cooking for dinner. Speeding through the darkness by yourself is a great way to clear your head. Plus, nobody hears you when you sing along with your iPod. 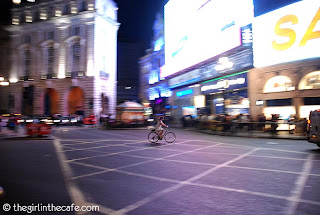 Some time ago, the State Government announced the building of six "super" schools. It is an adjective you hear more often these days - "super" GP Clinic, "Super" Highway, etc. I think the word is intended to give the impression of something bigger and more impressive than you have ever seen before. Occasionally it is not successful, such as with the cycling "super" highways in London: after much fanfare, it turns out that in the main, the local authorities have painted the gutters blue on select routes into central London.

Two of the new schools are Reception to Year 12 schools. One is just north of Grand Junction Road in Gepps Cross (the Roma Mitchell Secondary College), and the other covers two campuses in Smithfield Plains (Mark Oliphant College and John Hartley School).

The school websites use Google Maps to show where they will be situated. You will see that all three campuses are effectively in the middle of nowhere. I stand to be corrected, but in each case,  it appears they are being built in a paddock next to a busy road.  The location of the schools is understandable of course,  because it's cheaper than getting hold of land close to things and building there. However, the consequences of building big new schools in the middle of a paddock can already be predicted.

We are all familiar with the noticeable drop in traffic whenever schools are on holiday. Given the large percentage of children in this country who get to and from school in the backseat of their parents' car, there is no reason to assume that these new schools will be any different. They will have large student populations and the traffic outside them each day can already be predicted. Anyone familiar with David Hembrow's short video outside a school in the Netherlands will know that there is an alternative. The schools are also far away from libraries and sports facilities.

All of this brings me slowly to my point. I cannot help thinking that our schools (and other facilities such as aged care facilities) are built in places like that as a consequence of our planning decisions. Adelaide is a city that in the past few decades has been built with travelling by car in mind. Spare paddocks are turned into housing estates with what appears to be not a lot of thought devoted to things like public transport. Once the roads and the obligatory Coles/Woolworths surround by a car park have been put in place, some bus stop signs are put on the sides of the main roads. Unsurprisingly, everyone gets around by car.

If on the other hand a little more care was taken with urban planning, and thought  were given to the various proposed used of land and the best way of helping people get there, I think you would have schools, aged care facilities, libraries and so on closer to other activities. As it is, so often they're dumped in the middle of nowhere.
Posted by Edward at 4/18/2011 04:39:00 pm No comments:

The Dummies' Guide to Junction Design

If you work for whatever level of Government is in charge of local roads, there is no shortage of information on the Internet about encouraging cycling and walking and increasing their modal share. There is also plenty of material about the benefits of doing so. Some of the material is of high quality and some not so. One example is published by the Commonwealth Government and I had a good moan about it some time ago.

The Dutch Fietsberaad has plenty of high quality information, a lot of which is in English. The site contains a knowledge bank of articles in pdf format on everything from the design and maintenance of infrastructure to preventing theft.

Sometimes though the easiest place to go to is the blog of David Hembrow and Mark Wagenbuur. In their most recent post, they discuss new guidelines for bicycle infrastructure published by the National Association of City Transport Officials in the US (NACTO). One focus is intersection design which, under the NACTO guidelines, involves cars crossing a bike lane to turn right (left in Australia) and cyclists having to wait on a narrow painted line between the two lines of motorised traffic - much like you get here.

Here is the sort of junction design we have come to know and love in Adelaide: 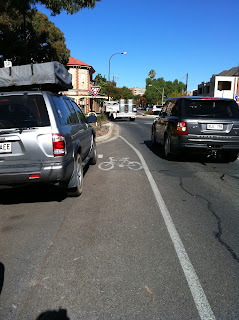 Making a decent junction that is safe for everyone is surprisingly easy once it is explained. And, importantly, it does not require any extra space nor road being "taken away" from motorists. It is explained in the 3 minute video below. I predict we will see this video being posted all over the place:

Note how cyclists can comfortably and safely make a turn right (our left) even if cars have to wait. If there are no pedestrians, there is no reason they should not be allowed to turn. The intersection is made even safer with separate traffic lights for cyclists. If motorists are permitted to turn, cyclists should be required to stop to avoid conflict and risk.

On the way to work this morning, I saw a couple of cars blocking the pavement. They had little signs on them saying "Traffic Survey".

I get concerned when I see that because it could mean a couple of things.

First, they could simply be counting cars. The consequence may be that they count a given number of cars passing in a given hour and conclude that more space is required. I really hope not.

Second, they might actually be conducting a traffic analysis and seeing how many pedestrians use the intersection, how long they have to wait, the environment in which they are required to wait and so on. They might count how many cars have school children in them, note what school they are going to and ask themselves why the parents are taking them by car instead of a cheaper and potentially faster way. They may also count the cyclists and see what they have to put up with. They may ask themselves why there are so few people going past on bikes compared to cars. When counting the cars, they may check to see how many people are in each and ask why that is and whether it is desirable. They might look at the buses and count their occupants and then look around to see how much space those people would take up if they were all in cars. They then might look at how many people are actually being carried by the lines of cars and notice that they could so easily fit on one bus, all sitting, with a double seat each. Beyond that, who knows? They may even start to analyse where all those single occupant cars come from and go to and ask whether there isn't perhaps a better way of transporting that many people in one direction.