When a car driver speeds past you leaving a space of only 6 inches, one of the benefits is that you get a good close view of their car stickers. Car stickers are good because they are a way of telling the outside world about the kind of person you are while you're stuck behind all that glass and steel.

For instance, your car sticker might tell the world that you're carbon neutral because some shrubs get planted each time you buy a new car. Some stickers tell politicians who might be stuck behind you at the traffic lights that you can do two things at the same time - fish and vote.

I saw a couple on a Commodore recently. One said simply, "Drive it as if you stole it". Sensible advice indeed.

The second sticker advocated, in a few words, open speed limits everywhere. It's all about freedom you see. A person in a car should enjoy the freedom to drive where they like, when they like and how they like. Any intrusion on that is a breach of a fundamental human right. After all, motorists pay billions of dollars every year in registration and petrol tax.

My all time favourite is one I saw a couple of months ago. It said:

Bring me coffee and nobody gets hurt.

Absolutely hilarious. It's as good as those signs you can put on your desk that say, "you don't have to be mad to work here but it helps". I nearly fell off my bike from laughing so much. In fact, it makes me giggle just writing it.
Posted by Edward at 7/20/2011 02:37:00 pm 6 comments:

I took a trip to Perth the other week. The number of meetings I had meant there was little time to see daylight. Most people when visiting a new city will try and find time to see some attractions. Not me - I go looking for bike paths and trains. Perth has a couple of both.

While wandering around the CBD, I came across this cycle path: 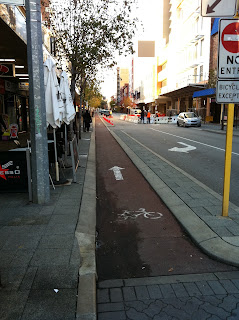 It's quite similar to the short-lived Sturt Street bike path in that it's too narrow and ends abruptly. Unlike the Sturt Street one though, it has gently sloping sides so you could potentially overtake if you wanted to. Walking further I came across a similar path: 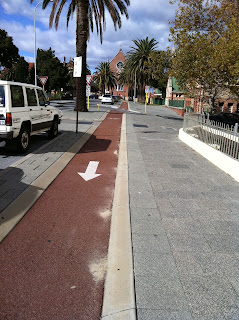 This one went around a square and even gave the appearance of taking priority over side streets: 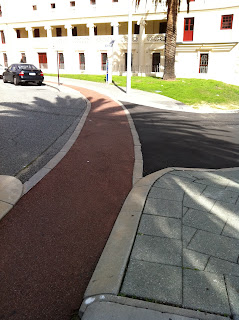 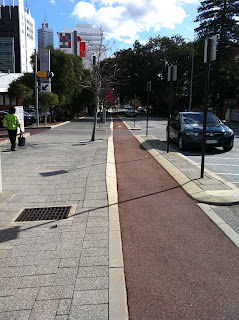 It went under this beautiful fig tree: 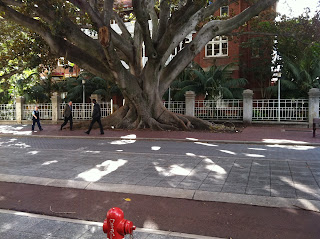 before coming to an abrupt halt like the other one: 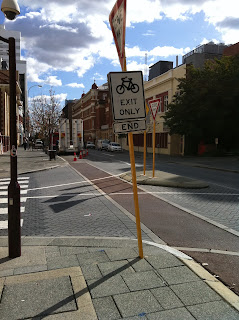 Close to Perth station was this two-way path that I later found out was known as the Perth Veloway. It follows the route of the railway line. This part is off road and has proper treatments where pedestrians cross: 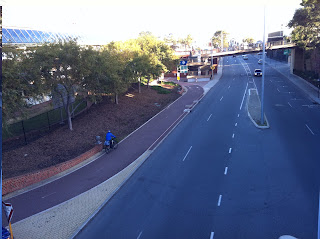 A bit of effort can be seen in the paving: 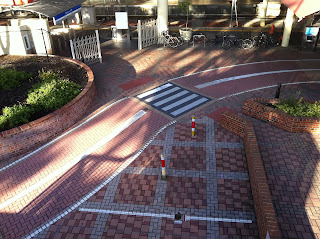 Later on, the Veloway just becomes painted lines on the footpath but it is not a busy footpath and so serves its purpose. Bikes have to share road crossing points with pedestrians though. Still, it's not bad.

By my observations, there seemed to be a similar number of people riding bikes as you see in Adelaide. As with the Eastern States, I saw a fair bit of helmet choice going on that you don't see here. Maybe we're the only ones.

The low numbers though were I think a reflection of the quality of the infrastructure - which is what you find the world over. There are a couple of bits of decent stuff but until it's properly joined up, your numbers are always going to be limited.

I got an email the other day from a friend and neighbour. Although parking in Adelaide is cheap and plentiful compared to many other cities, she has decided that $250 a month is getting ridiculous and she is instead going to ride a bike to work each day.

It seems the fact that I ride a bike to work makes me something of an expert. My friend knows nothing about the garbage I write in this blog - which is probably a good thing.

Anyway, she asked what in my cycling experience is the safest route to take. She also said she was contemplating taking out life insurance. I found that remark quite interesting and telling. Despite so many educational campaigns about sharing the road and how a metre matters; despite 20 years of mandatory helmet laws and how we are told they save lives, her attitude is clearly that riding a bike is so dangerous that it justifies life insurance if you do not have it already.

That is not the first time I have heard such a view expressed. It is a serious problem and shows that riding a bike has completely the wrong image in this country. We are clearly doing something wrong. I cannot believe that her attitude is a one-off. In fact, from talking to other people, I know it is not. Something different from education campaigns and helmet laws is required.

It will be interesting to see how long my friend keeps at it. I explained the safest route I know - which is the one I take. It involves little bits of riding on the pavement at the end of dead-end roads and to get across very busy junctions. By recommending that, I appreciate I have set back the cause of cycling again. After all, we know from comments to the newspaper that thousands of people are nearly killed every year because of crazed cyclists speeding past them at lethal speeds on the pavement. Also, as we know, cyclists need to earn respect from motorists by obeying the rules. Once that happens, as if by magic, suddenly motorists will stop pulling out in front of you when you have right of way and will give you plenty of space as they overtake you (after slowing down of course). Because of me, it probably won't happen tomorrow.

When I responded, I recommended that my friend not bother with lycra but just ride in her normal clothes. After all, I said, plenty of people already do, you can ride in heels and while pregnant. She responded saying that she had bought a comfy bike with mudguards, a chain guard, etc and that she would be wearing suits and heels.

I had yet another whinge the other week about the lack of places for pedestrians to cross on arterial roads in the metro area. It's not just Anzac Highway.

I took a bus along North East Road the other day and got off not far from the ABC building at Collinswood. Your chances are generally 50:50 but I drew a short straw and was dumped on the wrong side of the road. Here's a picture of the lonely bus stop. It's the small green shelter in between the graffiti and the urine stains: 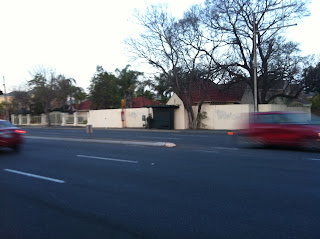 This is the view towards the city. It is difficult to see but you can just make out the green lights of the crossing at Galway Avenue in the distance: 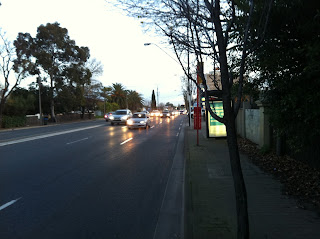 And here's the view in the other direction. You can't pick them out from all the car lights but the next traffic lights are at Hampstead Road. The problem is they are only for cars and there is no pedestrian crossing there. If you want a crossing with pedestrian facilities, you have to walk even further to Ascot Avenue - which is in the next suburb: 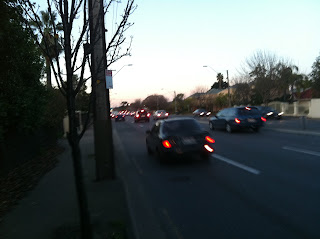 Each side of the road has three lanes of traffic with a speed limit of 60 km/h. You have to trust that people stick to it. In the middle you can see a median strip that's about the width of a narrow door. Generally you'll make it across half the road before you have to stand there and wait for the other side to clear. While you're there, drivers will happily speed past you without slowing down or giving you a bit of extra space.

They can't be blamed of course. If you see the world from behind a car windscreen, that will necessarily inform your view of the world. You certainly will have no idea what it feels like to cross North East Road as a pedestrian and get stuck in the middle there. If you see someone doing it, you assume - not unreasonably - that they are a weirdo.

And I was wearing my best suit too.

Anyway, whinge over. It's just another illustration of very little thought being given to pedestrians. Remember also, there is a primary school on that stretch of road. If you ever hear a motorist complaining that they are poorly treated, shake your head silently and walk away.
Posted by Edward at 7/10/2011 03:02:00 pm 3 comments: