If you really have nothing better to do than to spend your spare time reading bicycle blogs, it doesn't take too long to come across a phrase called "vehicular cycling". As I understand it, it refers to a series of techniques for dealing with an environment built primarily for the fast movement of motor vehicles. As an example, "taking the lane" refers to the practice of moving to the centre of a traffic lane so that (theoretically) drivers behind can see you and do not cut you off at the intersection or roundabout or other pinch point that you are approaching.

Some of the techniques are worthwhile in a hostile environment as survival techniques. I think they become a problem when they are sold as the best way for keeping people on bicycles safe as opposed to designing the environment in such a way that conflicts between motorists, cyclists and pedestrians are avoided. When I say design, I do of course mean proper design rather than designs that end up making things worse - which does happen from time to time.

A good tongue in cheek critique is here.

My own experience is that the problems with techniques such as taking the lane are twofold. First, you are putting your safety into the hands of the person behind you and how is in control of a very large and potentially lethal piece of machinery. The fact that you are in front of them does not guarantee that they will see you. Second, most people do not know what taking the lane is. It can be perceived as arrogant or anti-social when a person in a car, for no reason apparent to them, is greeted by a padded, lycra-clad backside in front of their windscreen. They will not necessarily try to kill you as a consequence but people have been known to make dangerous manouvres in an attempt to get past.

One of the best tips I was given for surviving hostile roads is to assume you are invisible. So for example, when you are approaching a junction with a road to the left where it is obvious cars coming from that direction have to give way to you, do not assume (a) they know that and (b) that they have even seen you. Very often they have not because their focus is on where they expect cars to be rather than where bikes will be.

Vehicular cycing, bicycle driving or whatever you like to call it suffers from the obvious drawback that nobody else knows about it. A perfect illustration is in this (frankly appalling video):

The cyclist is doing everything right. She has right of way but is totally ignored. Had she acted like a vehicle she would be under a vehicle.

Most people do not wish to harm others but setting up a system like that where road users with very different sizes and speeds are required to mix is a recipe for disaster. Unsurprisingly, only a small number put themselves in that position. It means the road toll is lower - not because it is safe but because they are so few people who put themselves in positions of risk.

As Dr Behooving so eloquently put it, "Designing out risk is so much better than expecting humans not to make errors”
Posted by Edward at 8/30/2012 04:28:00 pm No comments:

I was reading one of David Hembrow's older posts recently all about how separation is achieved without bike paths on many roads. A comment came "with an agenda" from someone who didn't like the idea of being "forced" to use bike paths. It was gently explained to him that nobody is forced to but that given the choice between a direct and safe bicycle route and trying your chances on a busy four lane highway, most rational people choose the former.

A further comment suggested that the surface on the bike paths was of poorer quality. Again, it was explained slowly that that is simply wrong. He says:

It's sometimes of lower quality, but also sometimes of far higher quality. There are no potholes in the city which I live. Not one, either on the roads or on the cycle-paths. More than half the surfaces have been replaced in the five years that we've lived here, which is in line with the local policy of replacing everything every seven years. Are the roads that you cycle on all less than ten years old? Do you have potholes in Maryland?


We certainly have potholes in Adelaide. I don't know if it's the recent rain but they are everywhere. Here is one intersection near me: 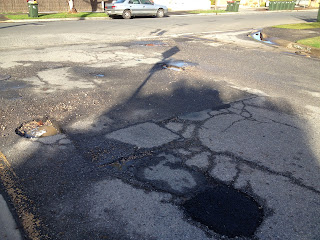 Here's a close up of one pothole: 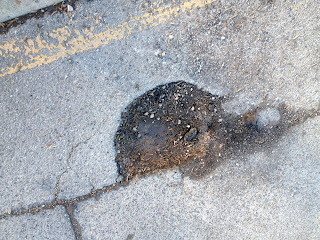 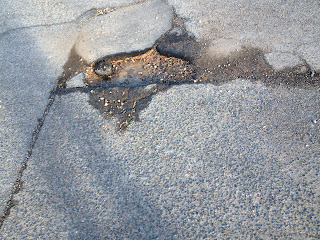 Here's one in the process of formation: 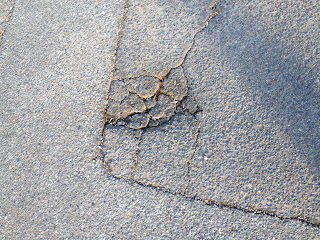 and here's the bog up job to fix it: 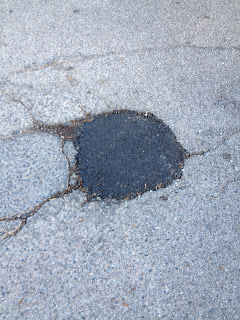 Here you can see how a passer-by has dutifully piled up the broken tarmac into the gutter: 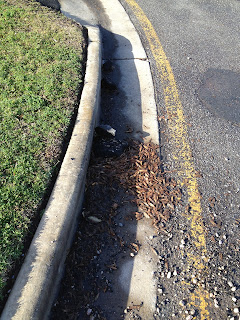 They are everywhere. Not just on the local side streets but you can see them beginning to form on some of the main roads too. The main roads are the responsibility of State Governments. If you are living in a marginal seat, chances are your roads will be fixed first. In safe seats, it can take longer.

Smaller, residential streets are the responsibility of local councils. They have to pay for all of that maintenance through collecting rates from residents. They also get grants from the State and Federal Governments such as the "Roads to Recovery" scheme.

I can't help thinking that the maintenance costs would not be quite so high if local councils didn't allow all of their roads to be used by all and sundry without any financial contribution from them.

Bearing in mind that I do not know the first thing about constructing roads, it seems to me that two things would make a difference. The first is reducing the heavy traffic in the first place. How that is done is obvious. The second is choosing a road surface that is not so susceptible to potholes. The layers of tarmac that we use appear prone to cracking after some time. The cracks get bigger over time and sink. Eventually, the surface of the road just seems to collapse into a pothole. Repairing it is expensive and so you see the uneven patches like the one in the photo.

My own humble opinion is that residential streets should be arranged in such a way that fast driving is physically impossible. Parking for residents and visitors should be arranged in clear bays that are indented from the road itself. Rather than tarmac, in some cases, pavers or bricks might do the job - only because if there is a problem, relaying bricks is so much easier and better than bogging over broken tarmac (it can be done smoothly so that it is bicycle friendly). You could use one of these fantastic machines:


Allowing through traffic to use council run and maintained side streets amounts to a subsidy paid for by local ratepayers. It is also unnecessary. Changing that stae of affairs is one of a number of easy policy changes that could be a world of difference.


As a quick postscript: it should be said that David Hembrow addressed each of the poster's comments with evidence. He did not respond again.
Posted by Edward at 8/10/2012 02:20:00 pm No comments:

Changing the world one bus stop at a time

Back in January 2011, after complaining about a pedestrian crossing, I bumped into a woman at a bus stop. She had been waiting for some time and her feet hurt. There was no bus shelter or seat there. I wrote to the council about it and, for good measure, wrote a blog post.

I go past the bus stop almost every day and nothing has changed for 18 months but today, I saw this: 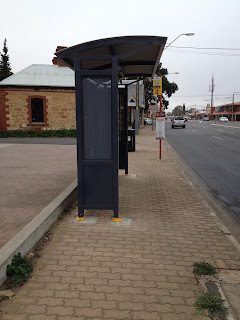 A shiny new, grey (:\) grafitti proof bus shelter. Inside it is a little bench. The school boy I saw there looked just as miserable as anyone does at a grey bus stop but the rain was off his head and had he chose to, he could have sat down.

I would like to be able to take credit but no doubt the bus stop has been in the planning stage for a while.