If, like me, you subscribe to the view that a brief surf of the web mid-morning actually increases productivity because it gives you a little break and allows your brain to refresh, it is a great time to come across new sites, blogs and videos. This one I found on a blog about cycling in Munich. It's made by a Spanish student, hence the Ricky Martin accent, and is all about proper inner city planning. It makes similar points to those often made by people like Jan Gehl but it is good to see it done from a different perspective with cool graphics.


laciudadidea-english from la ciudad on Vimeo.

Another older video that I keep going back to is a talk that John Howard Kunstler did for Ted.com. Again, similar points about the mistake of designing cities and roads primarily with cars in mind. I just like his style:

My all time favourite comment that has been shouted at me more than once while I am riding is "get a car". I love it because of its originality and its logic. It is logical that if you are on a bicycle, you are a loser and plainly cannot afford a car. There is a famous quote, often falsely attributed to Margaret Thatcher, that, "A man who, beyond the age of 26, finds himself on a bus can count himself as a failure." Same thing.

Also, by following the brilliant recommendation and getting a car, you solve the problem that the person has with bicycle riders, eg: "lycra-clad lunatics", "law unto themselves", "disobey all of the road rules", etc, etc, ad nauseum. Getting them into a car is the answer of course. Another car in front of them is exactly what that person wants.

It's also so original. Every time I hear it I nearly fall off my bike as I slap my forehead and ask myself why I was not clever enough to think of that.

As we all know, people who shout that sort of rubbish at other road users are wankers and happily there is a blog devoted entirely to them. It is called A Hundred and One Wankers. It is based in and around London but what is reported could be anywhere. A great read.
Posted by Edward at 8/20/2010 12:13:00 pm No comments:

Mike Rubbo has made some great cycling films. He is on a mission to bring back the old style sit up cycle into Australia. This film I think is one of his best. It is his suggestion to Tony Abbott to show a bit of leadership and help transform our cities. It's well worth a look:

One of my favourite things about people is their varying interests and how passionate they can be about them. I used to love watching the medieval fighting club at university in orientation week. Some of them travel around the world with their cardboard swords and shields for meetups.

The internet has made pursuing your interests much easier and more rewarding. You can get to know people from around the world who share you particular passion. I have a peculiar interest in looking at pictures of pretty women on bicycles. It is as if Copenhagen Cycle Chic was invented just for me but amazingly there are people everywhere not only following that site but making their own copies.

I also have a bizarre obsession with railway trains.

With the Internet, news in your particular area of interest can travel very quickly. And so it is with Melbourne's new bike share scheme. It is a great idea that is just not catching on. It has been discussed on Copenhagenize, Mike Rubbo's site, Real Cycling and also by that sarcastic guy from Waltham Forest in London. And it's not looking good. Even Andrew Bolt had a serve.

The general concensus seems to be that mandatory helmet laws are getting in the way of it. The argument is that the bike share scheme is aimed at tourists and other people who may wish to make a quick trip on a bike. The helmet laws remove all spontenaity. If you are a tourist planning to spend a day exploring Melbourne on a bike, you'll probably think ahead and organise headgear. If you are an office worker going to a meeting on the other side of the CBD but close to another docking station, you may suddenly have a brainwave and what to take a hire bike but the lack of headgear gets in the way.

I think it is impossible to say for sure whether it is all to do with the helmet laws but I think there is an argument there. Unsurprisingly, the issue has raised yet again the helmet debate. I am no expert but I have tried to read up on the subject and from what I can tell, whether helmets offer protection and the extent of that protection depend on the study. It is not conclusive either way but if Melbourne bike hire is anything to go by, they do seem to be a barrier to cycling.

The concensus on the blogs I have read seems to be to let adults decide. I have to say it is a view I support. If you are speeding along a main road on a road bike in a racing position, you will probably wear a helmet. If you are speeding down a hill on your mountain bike, you will probably also wear a helmet but I think a different type. Perhaps not so though if you are pottering through the neighbourhood on your Dutch granny bike with a baguette and some leeks in the basket.

Where they are not compulsory, people seem to wear helmets for different reasons. It may simply be because it makes your husband or wife feel better (I would probably be one of them if helmets were not mandatory).

My biggest problem with mandatory helmet laws, particularly in this country, is that they have become a cop out. Every piece of government published literature about cycling warns people to wear bright yellow and put on a helmet but there is really nothing else done to protect cyclists. Helmets may indeed make a difference in certain limited circumstances but they are of limited use when you are hit behind by a car travelling at 60 km/h or hit from the side by a truck with a bullbar.

I do not think that helmets themselves discourage cycling. Mandatory helmet laws might but the strongest deterrent is the lack of genuine safety. If people do not feel safe using roads, they will not do so and will not allow their children too. Those countries where cycling's modal share is highest do not have mandatory helmet laws, although many people choose to wear them, but they do have something very different from those countries with a low cycling modal share.s 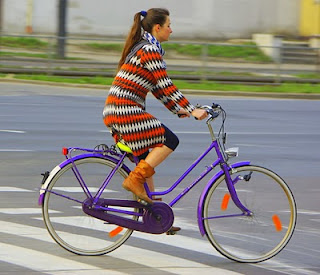 With moderate fanfare, the Department of Transport, Energy and Infrastructure has set up a new website called "Cycle Instead". We are told it "generates cycling routes using Adelaide's Bikedirect network of main roads, bike lanes, local streets, off-road paths and some unsealed paths".

I had a go on it and asked for the route from Kensington Gardens to the CBD. It involves a long ride along Kensington Road, across Brittania Roundabout, along Dequetteville Terrace and then take the fast Formula 1 bend into Flinders Street. If you are in a car, the route is probably perfect.

I won't be sending my children on that route in any hurry though.

If you click "low traffic" on the Route Type dropbox, you get a change. The route as far as Dequetteville Terrace is good (you avoid the roundabout at least) and it includes the pathways through the parklands.

This seems to be a good initiative if you are jumping on a bike to travel to work for the first time. If you have been commuting for any length of time, you would probably have already worked out your favoured route. It is not bad but far more effective I think would be proper signposted routes like the suggested Bike Boulevard through Beulah Road with decent treatment at intersections. 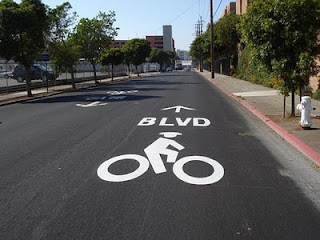 One of my favourite websites is George Monbiot's blog. He is a columnist with the Guardian.

His most recent entry, called Turning Estates into Villages, summarises particularly well the effect that our built environment has on us. He is right of course. You can see it every day. There is a direct relationship between the built environment and how many children you see playing, how many people walk to the shops or to visit their neighbours and also how many people choose to walk or cycle generally. Those places with wide, fast-moving roads have fewer people walking or cycling. This is nothing new of course. Look what happens when Rundle Street is closed during the Fringe.

When people campaign tirelessly to try and calm traffic, to try and have a school built within walking distance of where they live, to try and have roads narrowed and separate bike paths installed, it is not part of a war on motorists and it is not because they are trying to impose their own form of social engineering on everyone else. It is because these things work. They are connected. The taxes you pay can be used to fund any number of education campaigns about fitness and healthy eating but in the end, people are entirely rational and act in a way that makes perfect sense taking into account their surroundings.

As Kevin Costner said, before he went a bit bonkers and grew gills in that strange film with lots of water, "build it and they will come".

Streetfilms has made the point brilliantly (again) in their latest film about Copenhagen. This time they're describing how the city authorities have calmed traffic and made car-free public spaces.
Posted by Edward at 8/10/2010 04:08:00 pm No comments:

There have been two articles of note on Adelaide Now of late. The first was about Stephen Yarwood's plan for proper bike lanes around the city. He plainly knows what he is talking about. He was in Copenhagen recently for the Velo City Conference with a bunch of urban planners from around the world. Also, listen to what he has to say on Angus Kingston's blog.

Stephen is running for Adelaide City Mayor and civilising Adelaide's traffic is one of his plans. He is not deterred by what happened in Sturt Street and is encouraging us to learn from it to get it right next time. As he says, the first one "was flawed because the lane installed on Sturt St was not actually the same style used in Copenhagen and was not integrated".

The second article was along similar lines. Mariano De Duonni, from urban design firm Hassell, correctly says that the mistake we have made so far is that our approach to bike lanes has been from an engineering point of view and not an integrated design point of view.

Both articles attracted a lot of positive and supportive comments. Gotta love that.
Posted by Edward at 8/02/2010 08:49:00 pm No comments: