In an excellent speech a short while ago, David Burton, the Convenor of the Adelaide 2050 group, pointed out that Adelaide's CBD has one tram line, one railway station and, as from a few weeks ago, one segregated bike lane.

And oh my goodness, has that segregated bike lane caused some frothing at the mouth.

They are still talking about it on the radio and the congestion it is apparently going to cause. Forget that traffic movements on that part of the street are 10,000 a day - the same as Rundle and Hindley Streets, both of them only one lane each way.

Forget that Frome Street does not even take traffic across the whole CBD. Until a few decades ago, it was a couple of tiny lanes. They were widened and a whole bunch of historic buildings flattened to make way for what was to be a wide north-south arterial right through the CBD - a bit like most of the other roads except that was potentially even wider. As things turned out, it never went anywhere.

Forget also that this was the subject of extensive consultation which resulted in overwhelming majority support. The bleaters and moaners were asleep at the wheel (literally!) when that happened.

Stage 2 of the consultation will begin soon to begin the next phase of what will become a (hopefully the first and not the only) dedicated north-south bike route through the city. The next phase is Pirie Street to North Terrace: 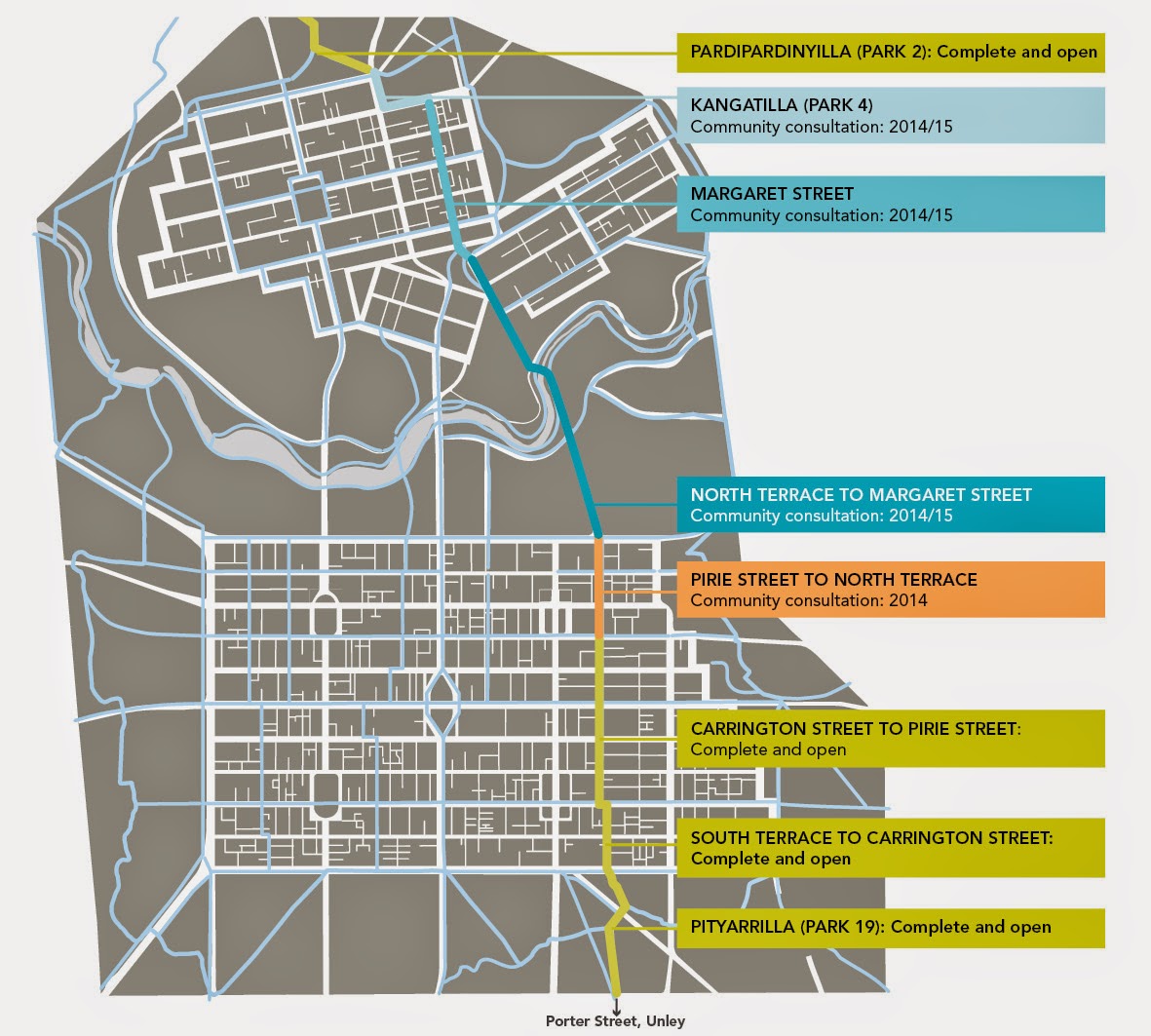 This part of Frome Street is much busier than than the length with the completed bike lane. Traffic volume (motorised that is) is about 15,000 vehicles a day. Accordingly, it will be very difficult to argue successfully for the removal of a lane of traffic. It is apparently needed. Close to North Terrace, the right hand lane is needed so that it can be blocked by buses that are held up trying to turn right. The left lane is then used by traffic speeding down the hill towards the bottleneck near the zoo where two lanes become one again. It all makes a lot of sense.

Bearing in mind that we are more than likely going to be stuck with two lanes of traffic each side of the road, the obvious answer is to remove the lane of parking. During busy periods, keep the left traffic lane as a clearway but at other times allow parking. Traffic is lessened at those times so the one remaining lane each side will be quite adequate. It's what happens on a number of roads - Unley Road is an example that springs to mind.

This is a rare opportunity to get the design just right so people can see it works and that traffic is largely unaffected. Getting it right means that it will be much easier to extend the concept to other streets and build the complete network that we so desperately need.

Not only is there a lot of motorised traffic on that section of the street, there are a lot of people on bikes too. A wide lane with plenty of space of overtaking is required. To assist with that, the kerbs on the side of the lane should be forgiving - low and at a 45° angle: 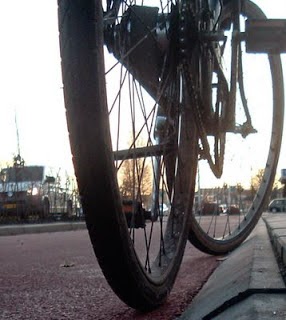 Borrowed from the excellent and well known A View from the Cycle Path. The post it is on explains with the help of a short video why sloping kerbs are a good idea.

My only criticism of the current Frome Street bike lane concerns its kerbs. On both sides, they are the normal height for roads and almost vertical. When riding along you need to be careful not to go too close to either just in case you hit your pedals on them. That narrows the effective width of the lane.

For the next stage, we could do a lot worse than adopt the famous Danish design using the half dropped kerb with a lane as wide as the current parking lane: 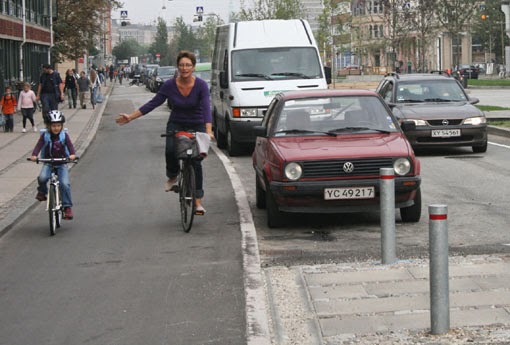 Oor better still, one with a built-in buffer to deal with doors on parked cars.

There are a couple of benefits:
Although as I say it is inferior to the best Dutch designs, its ease and cheapness is I think vital to its success. We know that transport choice and street layout have very little to do with "culture" and more to do with deliberate political choices. Nevertheless, Adelaide's stubborn resistance to change has to be experienced to be believed. The ridiculous carry-on over one single bike lane shows that it is alive and well.

People listen to those muppets on the radio but if things are done right, we can drag them, kicking and screaming, into the future.

Thanks to staying up late and checking Twitter, I was led (from at least three different sources) to this brilliant video made by Paul Van Bellen:

What is particularly nice is to see and hear the sensible and rational responses from 8 Australians picked at random outside a supermarket. It makes a heart-warming change from some of the shit we have to read in the comments section of some news websites.

8 out of 8 people agreed that we would benefit from this sort of thing. Not only by providing a choice that is available to non-motorists (like Cameron with his scooter and David with his wheelchair) but judging by the average prices, we would save some serious coin as well.

I'm not sure we can afford any longer not to do this.