My wife is hot

My wife recently bought herself four dresses from Jigsaw. They look fantastic.

The first was more formal than the others. The top half is silk and the rest is a "tulip style skirt finished in a silk jacquard print that sits just below the knee". She looks totally hot in it: 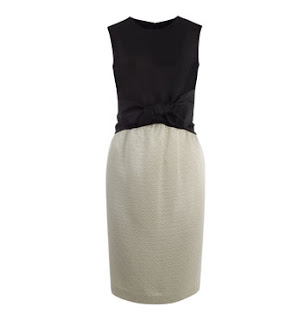 The next is a summery one. It is made of silk and has what is described as a leopard print. The silk is super soft and thin and feels fantastic. She looks totally hot in it: 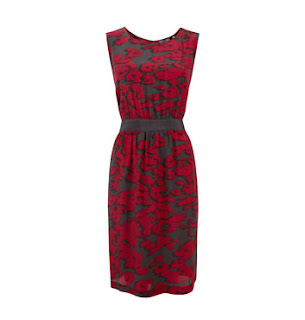 The thid is a "polka strappy dress". It sits beautifully. Very stylish. After she had worn it the first time, on a particularly warm day, my wife mentioned how comfortable and cool it was compared to jeans. I haven't ever worn a frock for any extended period so I am guessing it has something to do with having a fresh breeze wafting around your underpants. I'd need to get a woman's view on that one. Anyway, she looks totally hot in it: 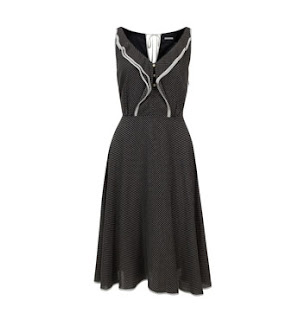 The last is a cotton summer dress. It's not available off the website any more so you can't get a picture of it. Suffice it to say, she looks totally hot in it.

After she had brought them home and was trying some shoes to go with them (black espedrilles also from Jigsaw), I commented to her that riding a bike in tall heels is actually easier than walking in then. My wife has a bicycle. It's an old Malvern Star girls bike that she has had since she was 12. I cleaned it and oiled it and changed all of the brake pads and cables when I first became a bike-weirdo. I've also attached a shopping basket to the front.

Regrettably, my wife doesn't ride it that often. I always tell her she should ride it to the local supermarket or if she's meeting a friend close by. Ruining your hair with a plastic helmet and having to dodge traffic is probably a bit of a turn-off.

In this country, we seem to have killed off that type of cycling culture. There are pockets of it in Sydney and Canberra but in little old Adelaide, it is rare to see women dressed like that getting around by bike. We will know that cycling is mainstream again when we do.


Charlie Winston "I love your smile" from HK Corp on Vimeo.

The steel jacket of rudeness

Like most people I know, I have put together a route home from work that as much as possible avoids riding on main roads. It's self-preservation really. The whole "take the lane" ideology is all very well but it still doesn't guarantee you from being driven into from behind by someone who is drunk, speeding, fiddling with their radio or just scratching their balls.

Despite my best efforts, there are places when avoiding having to navigate a main road is just impossible. On those occasions when I have no choice and it is just too dangerous to ride on the road, I take the pavement. It worries me because that apparently is what upsets motorists (if you were to go by comments on some websites) and we apparently need to "earn their respect" by obeying the road rules before any money can be spent on decent infrastructure.

I ride about 25m along the pavement before I hit the junction and cross at the pedestrian lights. Then I double back about 15m before continuing on my way along the side street. The alternative, if I were to obey the rules, would be to attempt to turn right on to the main road and cross 4 lanes of fast-moving traffic.

This is the view from the crossing. It was taken early in the morning. Hence the shadows. The street I come out of is on the left just beyond the clearway sign. The road I take after crossing at the junction is on the right just next to the green truck: 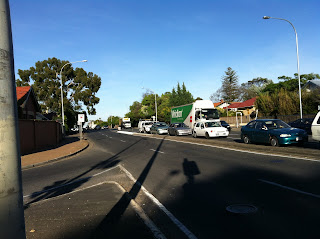 In years of taking that route, I have never come across a pedestrian. Today was the very first time. I met her just as I came around the corner. I was going very slowly and could easily stop. She stopped too - abruptly. I apologised repeatedly. "That's ok", she said cheerfully. I admitted I should not have been there and explained that the road was just too busy to ride on. She said understood perfectly ("I know, it's horrendous") and we went on our way.

I have to wonder whether the reaction would have been the same from a motorist. There is something about being cocooned inside that steel and glass jacket that makes people shout and gesticulate rudely in a way that they never would if they were face to face with someone. I don't think I would have got quite as friendly a reaction if I'd been in the wrong place on the road. After all, that is not how you earn respect.

Sure enough, once I was on my way I came up to a small junction with a side road to my left and a white Commodore came charging towards the intersection stopping with its nose sticking out into my path. As is so often the case, it would have hit me had I not slowed just in case. He did wait but it was obvious that the driver was in a tearing hurry so instead of taking the next right (which was the way I was going) I waited for him to pass. Sure enough, he sped around the corner with his rear tyres smoking and then sped to the next junction 120m away at the perfect speed to clean up anyone who accidentally crossed from behind a parked car and just loudly enough to annoy every single resident on the street. He's one of the people whose respect I apparently need to earn.

He drove that way because he could. He took two side streets to get himself from one main road to another and use the neighbourhood as a thoroughfare. That is what the road layout told him was appropriate. The speed limit on the side streets was the default speed limit of 50 km/h. There was no calming and no blocked road. The entire set up sent the signal that the road was for him to speed down rather than a place where people lived.

And that is the problem.

The crime of the century

A friend of mine has gone to live and work in Canada for a year. It's the same friend who wrote rude things about the Dutch some time ago. Currently he is in Calgary. He had a strange experience the other day. he wrote:

I was almost going to text message you - get this - in Calgary, Alberta, pedestrians have the right of way.

My friend and I (she lives here) needed to cross a main road, downtown. She just starts walking across and all the traffic stops! What a trip!

I have heard rumours of these strange faraway places that actually treat pedestrians with a little respect rather than total contempt. Until now I thought they were a myth, a bit like the legend of dry land in the film Waterworld.

Meanwhile, back on planet earth in Adelaide, police officers are being sent out to fine people for crossing empty streets. It is of course for our own safety. If it were not for them and the little red man, we would all walk blindly into the path of a bus.

Remember if you want to cross the road, you have to apply by pressing the button. If you forget to, well tough. You still have to stand there even while the traffic is at a standstill. You can jolly well press the button and wait for another traffic cycle - even though that could take 15 minutes.

It's for your own good.

A tip: Rule 231(2) of the Australian Road Rules makes it a crime to start to cross the road when the pedestrian lights are on red. If you are within 20 metres of the pedestrian crossing, rule 234 requires you to cross at the crossing - otherwise you commit another crime. If you're more than 20 metres away, you're fine. The only requirement is that you cross by the shortest route and not stay on the road longer than necessary. I think we should start painting pink blobs on the pavement 20 metres away from crossings so that we all know. 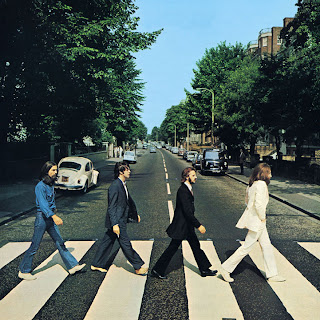 I took a trip to Port Pirie not long ago for work. It's a two and a half hour drive north of Adelaide. It has a population of about 14,000. Its biggest employer is Nyrstar which operates the lead smelter there.

It has a few things of interest to visit such as the museum that used to be the railway station. It faces the road because trains used to run down the main street: 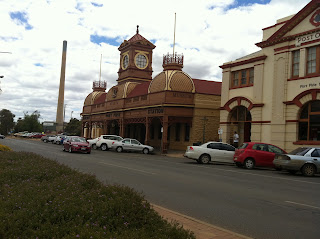 I find Australian country towns generally have a great deal of civic pride which is often refected in their parks and war memorials. Port Pirie is no exception: 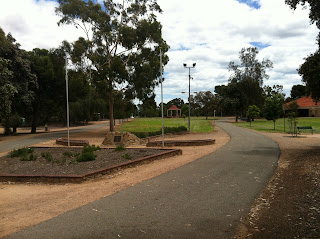 Like almost all Australian towns though, Port Pirie seems to be built for the motor car. All of its streets are wide with free car parks on both sides: 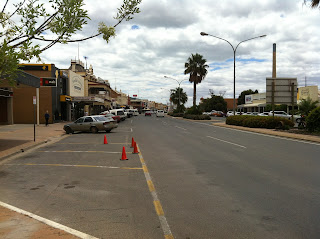 If there are not enough car parks on the road, there are plenty behind the shops: 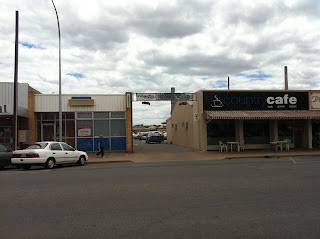 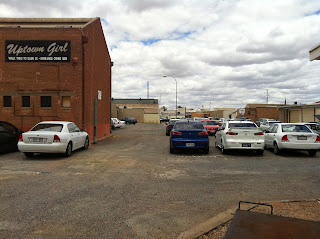 A little less thought is given to pedestrians. This is the side of the Woolworths supermarket in the centre of town. It's not exactly inspiring: 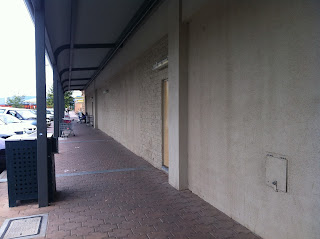 If you're interested in riding a bike around, you might have to be prepared for a bit of a walk. This is the bike shop: 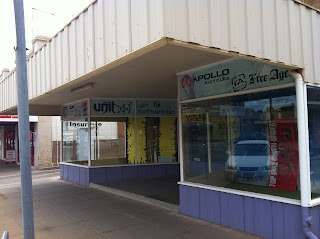 Nobody rides a bike there (other than the odd teenager on his bmx) which is a surprise really. A number of people who work in Port Pirie would come from smaller towns such as Laura to the east but the bulk live in Port Pirie itself. This is the town map: 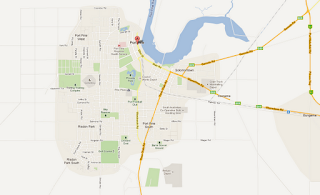 It's about 4km across and 5½km north to south at its longest - distances that are easy on a bike. Yet everybody drives everywhere. I wasn't there at school opening and closing time but I have no doubt there is a long line of cars in the morning and afternoon.

How can that be? Why would people spend money on petrol and wear and tear when they could get most places free of charge? Imagine the boost to the local economy if all of the money tied up running cars was freed up to spend on local shops, businesses and restaurants.

You can see from the photos that the town suffers from the same problem as other Australian towns and suburbs. If you try to bike or walk anywhere, it is only a short distance before you hit a huge, wide, fast-moving road. There is no safe place to cross and riding a bike along it is unpleasant and dangerous. Not only that but driving is made so easy by the bountiful supply of free car-parking.

On top of that, you cannot just get on a comfortable bike (often because they're difficult to get hold of and expensive) and go on a brief errand. You are forced to sweat under one of those plastic hats - another disincentive.

So how could it all be changed? Well to quote a favourite website:


Small towns like Port Pirie which are quite self-contained and far from the next town prove that excuses such as population density and length of journey are myths. People respond to their built environment and that is precisely what they have done in Port Pirie.
Posted by Edward at 12/06/2011 09:37:00 pm No comments: