Even when we're getting old and grumpy, we all still have things we would secretly love to get from Santa each year. I know of at least one bloke who would never admit it but would love to get an Airfix kit of a Spitfire.

Now that the preparation for Velo-City 2014 is well underway and we have some great keynote speakers organised, there are probably 101 things we could do in preparation and 101 more other new ideas that we will get out of the conference.

As a starting point, this is my wishlist for Christmas: 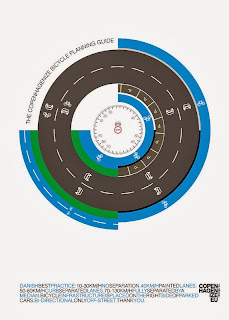 The important point to note is that this should not come after the event. Speeds and vehicle numbers can be decided beforehand by properly designating streets as residential, 'neighbourhood rings', main roads, arterials and so on. Designating streets in that way determines their role and whether, for example, they are through routes. For a better explanation, see one of my favourite blog posts of this year.

Our problem at the moment is that almost every single street or road is a thoroughfare.

Once you have designated your streets, divide suburbs or parts of suburbs into their own self-contained segments. Organise things in such a way that you have to leave each segment (by car) the same way you came in and use the designated arterial route to get to another segment. Filtered permeability of course means that there will be different rules for people on foot, people on bikes and in public transport.

Journey times by cars will be increased only marginally but it makes all the difference to the quality of living spaces.

I wrote a blog post about this a little while ago after finding out the estimated life span of a road surface. They are renewed generally every 15 years. If we make as part of that timetable, our road network could be transformed in 15 years. Even in 10 it would be unrecognisable.

There is a reason this is so important.

We hear calls for people to share the road, for their to be mutual respect and for things like one metre passing laws. They're all very well but even with the best intentions, human frailties get in the way and can lead to disaster. That is where good design comes in. Decent design can do a lot for safety by sending clear signals about speed, upcoming obstacles and, importantly, who goes where.

This related to wish number 2 and it is all about priorities.  For a far better explanation than I could ever give, see one of the old favourites.

A network of cycling routes or feeder buses synchronised with train times can increase the catchment area of each station by a significant margin. Cycling routes have the advantage of being so much cheaper.

Imagine being able to hop on your bike, ride 15 minutes without having to worry about traffic and main roads, parking your bike in abundant, secure, under-cover parking and then, after a very short wait, jumping on a train that will speed you to work. I know I would use it.

Here's Mikael explaining how it works (in part 3 of his 10 part series):

Adelaide City Council has not been idle in the last few years. The Sturt Street lane was attempted and learned from. There are new ones on their way on Frome Street. The Victoria Square redevelopment is underway, as is Rundle Mall and there are other bigger projects thanks to the State Government. Our "bicycle network" also continues to grow with bike boxes and new stencils on roads like Pulteney Street. The question is whether it is the right kind of treatment.

Suggest this to anyone who comes to the CBD by car and you will either be looked at with disbelief and, more likely, it will be assumed that you are either mad or joking. However if you have been following bike blogs this last year, you will have seen the Streetfilms film about Groningen and know that it works beautifully. Here's the link. The part about dividing into segments begins at the 2 minute mark.

Under such a plan, the four Terraces around the CBD become a ring route. To get from segment to segment (in a car), you must use the ring route. The main north-south and east-west roads can then become transit corridors for buses with big, well lit and comfortable bus stops.

If you look at parts of some Australian cities from the air, the amount of land that is devoted to storing cars practically free of charge is astounding. Here is Dr Behooving's take on Launceston. And here is a bird's eye view of Norwood, a densely populated inner city suburb where space is at a premium:

Asking that it is made easier to walk or take some other form of transport that is not a car is not about forcing anyone out of their car. That simply does not work. It is simply about providing an environment that allows people to make the most rational choice. If people want or need to take the car, so be it. If that is the case, it is ultimately better for everyone if we use the land available for efficient uses and dig holes to store our cars. It works especially well when it is hot.

The end result, while a little more expensive, actually makes things better for everyone. Your car is safe, secure and cool if choose to come that way but it is just as easy to get there in other ways too. The environment seems to be preferable too.

This is another favourite post of mine that explains it all.

9. We seriously need that underground railway

This is quite topical because it is suggested in the State Government's Integrated Transport and Land Use Plan. Among the plans for new tramlines around and from the city to Prospect, Unley, Henley Beach and Norwood, it suggests as a long-term proposal a railway tunnel under the city with four intermediate stations. If you ask me, it is more important and will be far more effective than the tramline plans.

I have a blog post slowly brewing but to summarise, a tunnel under the city will allow long distance trains to service most of the CBD, it will facilitate easier train changes and will allow direct and predictable through train services. Regular services along with a combination of park-and-ride and the things under number 5 above will allow our railway network to service a pretty decent proportion of the metropolitan area.

If you ride a bike, you rock. And you should be told so. That is why I like the people from Cykel Karma so much. I'm not entirely sure what they say but you can hazard a pretty good guess. This is a great excuse to post their video again:


I bike CPH - god cykelkarma from I bike CPH on Vimeo.