This picture was posted on Twitter recently by the West Midlands Police in England: 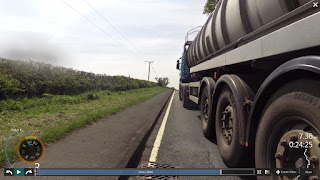 The caption was "It's close when you can read the writing on the tyres, don't pass cyclists towards a blind crest! #joysofcommuting".

It's particularly hair-raising with the drain right there.

The police later tweeted "Driver will be reported, overtake towards the crest, car came over the crest so the HGV squeezed me out #duecare #Safercycling #poorplanning".

I have to say that while the person on the bike would have shat his pants, at the same time I have a bit of sympathy for truck drivers. They are heavy and difficult to slow down. Granted the driver misjudged the passing manouvre but the alternative was to slow right down and then later accelerate (slowly) to overtake when there was a sufficient gap in oncoming traffic to allow a safe pass. On a narrow road like that, there's no way of knowing how long that would have taken.

It is the type of misjudgment of which we are all guilty only this time the combination of the truck's large size, the type of road and the bike being right there made it extremely dangerous.

Having said that, there is no excuse for the sort of purposefully dangerous behaviour that is described in this excellent piece from Beyond the Kerb.

Even where there aren't blind corners, on a straight road errors of judgment and a failure to pay attention can have fatal consequences.

It was, sadly, precisely that type of road death that led to the establishment of the Amy Gillett Foundation which was instrumental in convincing the State Government to introduce a minimum 1 metre passing law.

I can't help asking myself though - is such a law likely to make a significant difference other than in people's minds? It is rare for someone in a car to ram into someone else deliberately. These collisions are, like most, the result of either human error or a failure to pay attention. It is the consequences that are catastrophic as we saw only recently in Brisbane with the appalling, tragic and preventable death of Rebekka Meyer.

At the time of writing, it was reported that the inquest heard "conflicting evidence" from eight witnesses.

They could not agree on where the cyclist and the truck were in traffic before the accident, if her feet were on both pedals, or if she fell or was struck.


When you look at the intersection, all of those questions start to lose relevance: 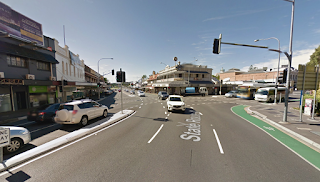 Who cares where the truck was beforehand? Who cares if Rebekka Meyer was hit or she fell? She was killed because that toxic road environment placed her in close proximity to a truck with massive blind spots. Isn't it that simple?

How can it be that we continue to tolerate such idiotic road layouts that lead to potentially fatal consequences? Roads with speed limits of 60km/h or more that rely on drivers to see people up ahead and then competently gauge speeds and distances before overtaking - and for everyone to get it right all of the time?

There are far more sensible ways to deal with that type of risk.

The fact that we continue doing this to people, in light of all the knowledge available, is bordering on the criminal.