Streets only for some

This great little video is currently doing the blog rounds:

It shows a young Dutch child learning to ride a bike. I found the video on Tim Gill's brilliant Rethinking Childhood website along with a great article about it. The point he makes is about the importance of allowing our children to develop in this way. He also acknowledges the designers who put together an environment that allows this to happen:

let’s not forget the planners and architects who put in those wide pedestrian pathways in their neighbourhood in the first place, and the politicians whose decisions made this happen. It is hard to learn how to cycle if you do not have safe, traffic-free paved areas to practise in.


Exactly. How many streets around Adelaide allow children to do this? None of them near me do, even though the council did try to (something I have already complained about).

You would be hard pressed to find a scene like this anywhere. If you do see children on bicycles, they are either in a special purpose park (having arrived their by car) or they are wobbling along a pavement that is too narrow for them and travelling far too slowly because:

a) their parents are walking with them (or slowly driving(!) as I saw recently) and
b) every single driveway is a hazard.

There was an article about driveways in yesterday's paper. Last year, there were 1204 crashes across the state with the vast bulk (85%) caused by cars reversing. Of those, 59 involved a bicycle and 33 involved pedestrians being hit. With those figures it is hardly surprising that you see so few children like the one in the video.

It does not appear to be commonly known but you actually have to give way when reversing out of a driveway - not just to other cars on the road, but to pedestrians and cyclists on the pavement as well as posties on their mopeds. That means treating the end of the driveway as if it had a stop sign. Stop, check your mirrors both sides and then slowly reverse. Just beeping your horn is unlikely to have any effect on a child who is probably not listening out for them.

Like many problems, I think you could reduce the number of those collisions by engineering the conflict away. If our residential streets were blocked much more, the traffic levels would be reduced sufficiently to allow people to learn to ride their bikes where they're supposed to - on the road. And you can then start filling the street up with all sorts of fun things: 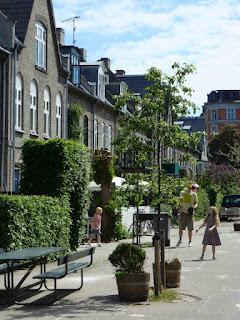